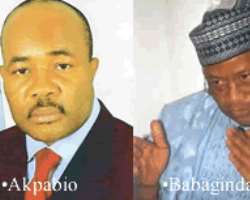 When General Ibrahim Badamosi Babangida(IBB) came to Akwa Ibom State in 1991, then as a military president, people lined the streets to welcome him; after all, he was seen as the father of the state which he created about four years earlier. That was about 17 years ago; now things have changed. About 30 per cent of the population now was not even born when the state was created 23 years ago; so they don't really have much to do with a Babangida except as an historical figure.

Thus, when IBB visited again recently to inaugurate the advisory council of the Faculty Board of Initiatives, an agenda setting group in the House of Representatives, only a few people knew about it. So, the street was empty. But the Ibom Hall, the state's makeshift auditorium was filled to the brim. Those who were not aware, or did not believe IBB would come in person, got to learn about his physical presence, rushed to the hall.

And there, he was sitting among the politicians. Many people did not even recognize him again. An elderly gentleman who rode to the hall on a bicycle, said, when Babangida stood up to address the audience: 'Is that IBB? He doesn't look like him again. O! owo idoho akaprawa ukpaiba (One is not a youth twice).

But when IBB started to speak, the old man said; 'Yes! That is his voice.'

The voice might have reminded him of that broadcast on September 23, 1987, which resulted in what is today Akwa Ibom and Katsina states.

IBB himself didn't forget that history. He saw his visit as home- coming 'because this visit affords me the opportunity to re-assess the judgment I took some 23 years ago by creating the state, and providing the people the opportunity to fully utilize their potentials and natural endowments. I have no doubt in my mind that going by what I have set my eyes on, from the short distance from the airport to this hall in terms of infrastructural development, if given another opportunity, I will recreate Akwa Ibom State, in a manner of speaking.

'The state brings me a sense of nostalgia in several ways. I could recall vividly the circumstances that led to the abrogation of the onshore/offshore oil dichotomy. If I may recall, perhaps, it was in this hall when the demand was made by one of your illustrious daughters and the golden voice of all times, Lady Christy Essien- Igbokwe, who pleaded with our government to drop the dichotomy issue to enable the state enjoy her natural resources. I'm proud to say that despite the criticisms against some of our initiatives, the growth and development of Akwa Ibom State is an eloquent testimony to the fact that we took the right decision for the right people at the right time, to spread development across the land and make government closer to the people of common affinity and cultural heritage.'

IBB gave a list of prominent Akwa Ibom people, dead or alive, who had made tremendous contributions to the development of the nation, but zeroed in on Gov. Godswill Akpabio thus; 'With due sense of responsibility, let me say without fear or favour that Akwa Ibom is lucky to have Dr Godswill Akpabio at the helm of affairs in the state. He is truly God's will to be at the saddle at this critical time of developing the state. And the numerous infrastructural development I have seen, or read about are indices that further strengthened my earlier argument that the people of Akwa Ibom qualified for a state. Unlike other states where lamentation of poor revenue has taken primacy, Godswill Akpabio has been able to aggregate the collective aspirations of the people with programmes and policies that bear meaning and value to the ordinary people of the state. Without equivocation, Dr Godswill Akpabio deserves our standing ovation and a big pat on the back.'

'As part of your mandate as initiatives, I hasten to suggest that it is high time the government at all levels had what I would call annual performance report showing how much revenue was generated and how it was expended. This will serve as a millennium antidote to corruption and of course, in graphic terms how the government has fared in relation to budget performance.

'I strongly believe that the masses that elected leaders and government deserve this form of feedback mechanism.'

He didn't, however, forget to remind the people of his presidential aspiration which he promised would launch Nigeria unto the 'global highway of possibility and abundant opportunities. I will not behave like the ubiquitous politician who gives promises and sets unachievable deadlines. I will concern myself with those plausible issues.'

When IBB was speaking, singing the praises of the government and people of Akwa Ibom State, Gov. Akpabio was not there. He was at the stadium taking salute from kids as they celebrated the Children's Day. It was his deputy, Obong Patrick Ekpotu, who stood in for him, and as usual, went into his didactics in socio-political developmental evolution, and concluded that the Initiatives as an offshoot of the legislature, has the responsibility of pioneering progressively realistic legislation. Were some people lost listening to him? Maybe not.

And then, the governor arrived, and the tempo changed. He stood by what the deputy said, probably not wanting to subject the people to another lecture. Akpabio just burst into songs; the kind of praise singing never heard from him to any man except God. First, he improvised a song on IBB which even caused the retired general to stand up and clap along though not understanding the wordings of the song rendered in Ibibio. He leaned over to the deputy governor, who must have given him the right interpretation.

Akpabio was not done yet; he sang IBB's praises again and again and the crowd joined him. His gratitude first to God and then to IBB for creating the state which has now given the people the opportunity to experience unprecedented development like the construction of Nung Udoe Itak Use Ikot Amama Road, the Afaha Obon-Iwukem-Utu Etim Ekpo Road, the Etebi Enwang Road, the Enen Nsit Road and very may other roads in IKot Ekpene, Ikot Abasi, Eket and Oron or the completion of Ibom International Airport, the Ibom Power Company which the residents have been expecting to start generating the 191 megawatts of electricity and many other projects. All this could not have been possible if IBB did not create the state.

But Akpabio was careful. The euphoria did not leade him to make the mistake of endorsing IBB as the presidential candidate of the state. Maybe, being the father of the state as IBB was described at the event was more of spiritual antecedent than its temporal relevance in 2011.

To the dean of the Faculty Board of Initiatives, Mr Eseme Eyiboh, the Initiatives is a post-era and agenda-setting forum of a league of some cerebral legislators in the House of Representatives, who believe in the realization of Vision 2020, and who are passionately committed to good governance in Nigeria through proactive and people oriented legislation.

'As a group in the House of Representatives, we seek to achieve a generational shift in the country's legislative processes.  The Initiative is a selfless, non partisan project that aims to achieve good governance through informed, proactive and responsive legislation toward a better Nigeria. This is done through public consultation and mobilization strategy on the platform of the national roundtable for proactive laws and good governance.'

Eyiboh explained that the ideals of the national roundtable serves to present an effective and informed interface between the legislature and the public as well as draw the abundance of talents and resource persons outside the legislature with the aims to capture and incorporate diverse opinions in legislation against primordial considerations.

The advisory board has the former Chief Justice of Federation, Mohammadu Uwais as Chairman, former Senate President, Senator Anyim Pius Anyim, vice chairman, and many notable Nigerians as members.