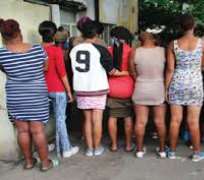 A young Nigerian girl has told a Lagos High Court about her ordeal in the hands of some human traffickers, who shipped her to Dubai in United Arab Emirates, for prostitution.

Before leaving Nigeria, the traffickers who have now been jailed 12 years each by a Lagos Court, took nude pictures of her and asked her to make an oath.

She was told to remit money to their agents in Dubai, with a threat of exposing her nude photos online, whenever she failed to do so.

The victim told the court that when she could not raise the money demanded, the convicts posted her nude pictures as earlier threatened.

Her story was heard by Justice Oluremi Oguntoyinbo of Federal High Court in Lagos, who sentenced two accused, Terry Homuere-Smooth and Priscilla Bassey, to 12 years imprisonment for human trafficking for prostitution.

Justice Oluremi Oguntoyinbo, sentenced the convicts, after finding them guilty on two counts of human trafficking preferred against them by the National Agency for the Prohibition of Trafficking in Persons(NAPTIP).

The News Agency of Nigeria (NAN) reports that the convicts were first arraigned sometime in November 2015, on charges bordering on organising and procuring the foreign export of a young girl (name withheld) to Dubai.

The offences according to the prosecutor Mr Sebol Langyi, contravene the provisions of sections 14 (b) and 18 of the Trafficking in Persons (Prohibition) Enforcement and Administration Act 2015.

During trial of the convicts, the prosecution called two witnesses including the victim, who told the court how the convicts forced her into prostitution on arrival at Dubai.

The victim said that it was when her nude photos went viral on the net, that the NAPTIP came into her case and the convicts were apprehended.

Meanwhile, the convicts during their evidences, denied the allegations and urged the court to discharge and acquit them of the offences.

Delivering judgment on Tuesday, Justice Oluremi held: “The prosecution has been able to prove its case beyond reasonable doubt against each of the defendants.

“Consequently, the defendants are hereby convicted as charged”.

After the court pronounced them convicted, lawyers to the convicts during a plea for mercy before sentence, urged the court to temper justice with mercy in sentencing them.

They told the court that the accused were first time offenders, and had showed great remorse during their detention.

“I have listened to the allocutus made by counsel to the defendants.

“In the light of above, I hereby sentence the first and second defendants to seven years imprisonment on count one, and five years on count two.

“The terms are to run concurrently and without option of fine”.

According to the charge, the convicts committed the offence in July 2015, alongside one Bella who is said to be at large.

They were said to have organised and facilitated the foreign travel of the victim to Dubai, to promote prostitution.

The convicts were said to have engaged their young victim in unwholesome sexual exploitation, contrary to the provisions of the Trafficking in Person Enforcement and Administration Act. (NAN)