Kidnappers Of A Police DSP And A 7 Year Old Girl In Lagos: 1 Arrested, 1 Killed, Others On The Run 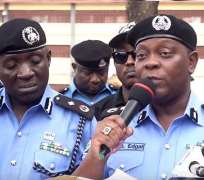 The Police in Lagos, on Sunday said they had gunned down a suspected kidnapper and arrested one other during exchange of gunfire with the syndicate.

The Lagos Police spokesman, CSP Chike Oti, confirmed the arrest in a statement, stressing that the incident happened at Agbowa area of Ikorodu, a suburb of Lagos State.

Oti said the two suspects belong to a kidnapping syndicate terrorising some parts of the state, particularly Ikorodu area, stressing that two other suspects escaped with bullet wounds after exchanged of gunfire.

According to him, the Anti-kidnapping Squad of the State Command, acted on the directive of the Command’s Commissioner of Police, CP Edgal Imohimi, on Friday, at about 11 a.m.

He said that the command received two separate reports on Nov. 13 and 16 from one Suleiman Eniola Ajumobi and one Veronica Ewuru about the kidnapping of their daughter and husband respectively.

“While Suleiman Eniola Ajumobi reported that his 7-year-old daughter was kidnapped from his house in his presence.

“Veronica Ewuru stated that her husband, one DSP Patrick Ewuru, a police officer attached to Force Headquarters annex, Obalende, was kidnapped from their house in the night when the victim came out to check on the Power Generating Set that suddenly stopped working.

“The kidnappers demanded for ransom of N25 million from Mr Suleiman and N10 million from the family of DSP Patrick Ewuru but later settled for N500, 000 for both families.

“At this point, the CP directed operatives handling the matter to play along with the kidnappers in the interest of the victims, who were still in captivity,” he said.

The spokesman said that as soon as the release of the two victims was secured, the kidnappers hideout at Agbowa was busted, where one Festus Abama was killed and Austin Ebimiyenwei surrendered.

Oti said that the arrested suspect confessed to the crime, while the victim had identified them as those who kidnapped them.

He said that concerted effort was being made to arrest those on the run, while the suspect already in police custody would be charged to court.