An ode for the Nigerian Soldier 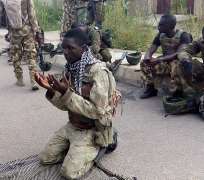 In other countries the armed forces are respected for their sacrifice

Yo I've never got to pick up a gun, pick up a knife, pick up a weapon and fight for my life

I leave it to another man
I don't know his name, I an Army of nameless citizens

It's a million candles in the air tonight
For angles watching over us (another man's life)
Power and money is all that It is, I how many die from evil politics

Those who've sworn to protect us from wrong, who's gonna sing them a song

As we mourn for the countless lives that has ended
Soldiers, policemen, families abandoned
Died to protect us to hold up the standard
Remember those lives that were lost in the vanguard

It's a million candles in the air tonight
For angles watching over us (another man's life)
All these leaders play games, you know why
Cause they never have to take aim
Never put holes in another mans soul
Another man die for the evil that you sow
Cause the whole world is heartless
Who's gonna push back the darkness
All I can do is to fight for the memories of all our soldiers and Marta's

It's a million candles in the air tonight
For angles watching over us (another man's life)
Oh lord we ask that you bless the souls of all those that have given their lives to protect us from the evil of insurgency, from the terror that will harm us at night

Provide for their families, comfort their loved ones

Amen.
C. M.I another man
A man is wearing black, black shoes, socks, trousers, lumper gloves. He is walking down a black street with all the street lamps off. A black car is coming towards Him its lights off but somehow manages to stop in time. How did the driver see the man?

Reporting on the Nov. 22, 2018, News agency Reuters quoting sources said that Militants killed around 100 Nigerian soldiers in an attack on an army base on Sunday, security sources said on Thursday, blaming Islamic State West Africa.

The toll is among the highest since President Muhammadu Buhari came to power in 2015 and it could raise pressure on him ahead of an election in February, not least because he has claimed victory over the nine-year insurgency.

The insurgents attacked the base in the village of Metele in northeastern Borno state, the epicentre of a revolt by Boko Haram and its Islamic State splinter group.

"The insurgents took us unawares," said an officer who requested anonymity. "The base was burned with arms and we lost about 100 soldiers. It is a huge loss."

Many troops are missing, the sources said. One soldier said more troops were killed on Tuesday when an attempt to recover bodies from the initial attack was ambushed.

"We all flew because we didn't know where the bullets were coming from," he said. "They killed some of us who went to evacuate the bodies of the killed soldiers."

"We left our amour, tanks and weapons. They were all there. The village is still under their control."

Four security sources said around 100 died in Metele and the death toll was not final. The fifth said 96 died in the northeast in recent days, mostly in Metele.

The senate, which is controlled by the opposition People's Democratic Party (PDP), on Thursday suspended its session in honour of what it said were 44 dead soldiers after the Metele attack.

Militants have killed hundreds of soldiers in the region in recent months.

Just four years ago, I wrote a tribute to a fine gentleman, officer and soldier--Colonel Kabiru Salisu. Again I am shaking us a bit, to see if we can find out where we lost our human milk of kindness. It was Kabiru, today it is Lt. Col. Sakaba and other gallant soldiers.

Before I go far, let me say that in all the battles and warfronts, the Nigerian armed forces, the police (which these days are awol), the Department of State Security and other security personnel have been compromised. There are moles, double agents etc, so a hard task is made even harder.

Sakaba and his colleagues were killed, their death is one that continues to defy logic in the information machinery of truth versus propaganda as dished out by Nigerian government and the army itself.

As these men are killed Kabiru kids are left without a father, loving wives are widowed, parents loose their sons.

Families grief, the nation is loosing humanity but we care less, choosing to focus on the feisty irrational hateshop of “artikulating and buharilizing”. I recall when Col. Salisu was killed, as a Muslim, on his phone the status read—The originator of heavens and earth. When he decrees a matter. He only say unto it. “Be-and it is”.. If only we know this singular fact.

Men who already fatigued, spending countless days on combat uniform. We might say they signed for it, but these are the heart of the Nigerian Army being cut off in their prime.

Strangely I dare say because many of us never knew these fine gentlemen, soldiers and officers. We just keep our Davido and Buhari's son is doing NYSC discourse.

They said, “Mocking bird, you are accused of insulting the king.” It asked when would it have time to insult the king, seeing that it must sing two hundred songs in the morning, two hundred in the afternoon, and two hundred at night, mixing it all up with some frolicsome notes?

Many of these men loved their job, and loved the nation. They have paid the ultimate price, Muslims, Christians, pagans, inclusive...they died so that you and I reading this can live.

I have been opportune to see how poorly armed these soldiers are, at almost a ration of 2:8 in comparison to Boko Haram when bullets are counted. Yet they fight on, we have issues of poor allowances; we have reported delays running into years before benefits are paid to families of deceased officers. As it was ala-Jona, not significantly much has changed with the Buhari era.

It is rather sad that in the midst of all these killings, Nigerians are battling each other along religious and ethnic lines. Like the Mocking bird making unnecessary excuses and noise.

But ultimately, we are all visitors to this planet, from God we come and to Him we return."

Again, “On behalf of a grateful nation, the family of Lt. Col. Sakaba and all our gallant troops who lost their lives in the line of duty, service of the nation and protecting people of Borno and Nigeria- please accept our deepest and most sincere condolences and know that the entire nation is with you in this dark hour and that we will never forget your loved one's honorable and faithful service - thank you...”

The man driving a black car in my earlier analogy, who avoided killing the man wearing black, was able to see despite all the darkness because there was light. When will Nigerians see the light of our precarious state—only time would tell.