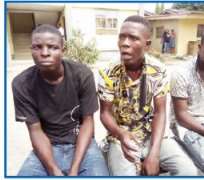 Imohimi, while parading the suspects on Friday, said the Command, while acting on a tip-off received from commuters about the attack, directed the Officer-in-Charge of the Rapid Response Squad, to deploy police riders to Oshodi Bridge, where the suspects were arrested.

“The aforementioned suspects attacked and robbed Guardian Newspapers' Editor-In-Chief on the above mentioned date at about 5:30pm and one hour after the attack, they were arrested.

“They were subsequently searched and a Samsung X8 phone belonging to Mr. Adesina was recovered from the thieves, including a Guardian ID card and four ATM cards.”

Imohimi added that the suspects, who confessed to the crime, were giving useful information to the police, adding that the Officer-in-Charge of the Special Anti-Robbery Squad, had been directed to take over the investigation of the case. – Punch