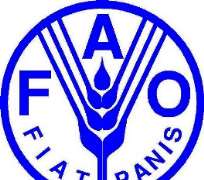 The Food and Agriculture Organisation (FAO) Representative in Nigeria, Suffyan Koroma, disclosed this while inaugurating distribution of planting materials for dry season farming at a farm centre, in Maiduguri.

He was represented by his deputy, Nourou Macki-tall. Mr Koroma, who attributed the development to the robust efforts made by the Federal Government and the humanitarian organisations, said the exercise targeted 40,600 farmers in Borno.

“Other factors leading to an improvement in the food security situation include favourable farming conditions, improved security in some areas and better access to markets,” Kotoma said.

FAO representative, however, warned that “without sustained humanitarian support, this number is predicted to rise to 2.7 million people within the next six months.”

He said that the target for the 2018 dry season farming was to reach about 564,000 persons in 80,600 households in Borno, Yobe and Adamawa while the distribution would enhance resilience of the farmers.

Mr Koroma explained that the beneficiaries would be supported with vegetable, maize, rice seeds as well as fertiliser.

FAO representative lamented that the conflict and displacement was preventing large numbers of people from farming and engaging in other livelihood activities.

In his remarks, the governor, Kashim Shettima, said that the state government partnership with FAO had impacted positively in uplifting food insecurity and livelihood of the people in the state.

Mr Shettima said that the outreach would go a long way in boosting food production and socio-economic activities of the IDP returnees in their liberated local government areas.