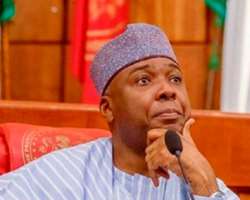 Socio-Economic Rights and Accountability Project, (SERAP) has sent an open letter to Prof. Mahmood Yakubu, Chairman Independent National Electoral Commission (INEC), requesting him to “promptly, thoroughly and effectively investigate allegation that Senate President Bukola Saraki spent between N200m and N400m in every state, except the six South-West states, to influence the outcome of the 2015 elections for the All Progressives Congress (APC).”

The organization also urged INEC to “investigate the sources of other cases of apparently unexplained campaign financing and contributions for the 2015 elections by politicians and supporters of the two main political parties that is, the APC and the Peoples Democratic Party (PDP). We urge you to collaborate with the Independent Corrupt Practices and Other Related Offences Commission (ICPC) and the Economic and Financial Crimes Commission (EFCC) in any such investigation.”

Saraki allegedly said in a leaked audio: “Out of the 36 states, I paid election money in 30. Some collected N300m, while some collected N400m, some collected N200m. The only states where I had nothing to do with was in the South-West. Even on the phone, I was calling and giving banks instructions.”

SERAP in the letter dated 17 November 2018 and signed by its senior legal adviser Bamisope Adeyanju, said: “Allegation that one politician spent billions of Naira on elections in several states of the country to support a political party if not thoroughly, and transparently investigated and prosecuted would undermine the public faith in the country’s democracy. It also risks distorting electoral processes and reversing the gains in the democratic and electoral processes that have been recorded since the return of democracy in 1999.”

The organization also said: “Such spending if allowed to continue can shape policy-making after elections, and improperly influence the decisions taken by the country’s elected representatives who will most likely consider their contributions to political parties’ campaign as ‘investment’ and thus seek returns on their purported investment to achieve electoral success for their party.”

According to the organization: “Probing the sources of such spending would improve transparency and accountability in campaign spending and contributions. This is essential to curb abuse and mismanagement of Nigeria’s resources, help to balance political competition, foster the integrity of officeholders, rebuild citizens’ trust in the political system’s integrity, as well as ensure that electoral processes and elected officials are not compromised by uncontrolled and unaccountable campaign funding.”

“SERAP urges you to prosecute anyone suspected to be involved and/or complicit in the alleged unexplained campaign spending, if there is relevant and sufficient admissible evidence of violations of international standards and national laws. We request that you take steps within 14 days of the receipt and/or publication of this letter, failing which SERAP will institute legal proceedings to compel you and the INEC to discharge your constitutional and statutory responsibilities in the public interest.”

“Unexplained and unregulated spending on election campaign would encourage politicians to divert public resources for political purposes rather than ensuring and directing critical spending for socio-economic development of the country, including on improving access to public services such as electricity, health, water, and education.”

“Campaign financing such as the spending allegedly disclosed by the Senate president undermines public trust and confidence in politicians and poses serious corruption risks, as it can blur the line between state and party politics, encourage the use of national resources to fund and influence elections. Such huge spending by an individual can even be converted into a conduit for money laundering.”

“SERAP therefore urges you to investigate the sources of campaign financing and contributions by Saraki and by other politicians and other individuals to APC and PDP if INEC is ever to rein in the role of money and level the playing field for candidates and political parties in the 2019 general elections.”

“INEC should carry out the investigation and prosecution in collaboration with the ICPC and EFCC, and send a strong message to politicians and political parties that INEC under your leadership would not tolerate any infringement of the democratic and electoral processes ahead of the 2019 general elections.”

“SERAP notes that international law has increasingly recognised the importance of transparency for mitigating corruption in party politics and using disclosure of political financing as a means to improve it. The United Nations Convention against Corruption (UNCAC) to which Nigeria is a state party obligates states to enhance transparency in the funding of candidates for elected public office and, where applicable, the funding of political parties. Similarly, the African Union Convention on Preventing and Combating Corruption, which Nigeria has also ratified requires states to incorporate the principle of transparency into funding of political parties.”

“Further, Sections 225 and 226 of the 1999 Nigerian Constitution (as amended) affirms the powers of INEC to monitor, inquire into and assess campaign finances, and a party’s source of and management of funds, while Section 228 provides sanctions with regard to party finance and campaign finance.”

“According to reports, Senate President Bukola Saraki allegedly claimed in an audio clip while addressing Peoples Democratic Party that he spent between N200m and N400m in every state except the six South-West states, to influence the outcome of the elections for the All Progressives Congress. Saraki reportedly said “Out of the 36 states, I paid election money in 30. Some collected N300m, while some collected N400m, some collected N200m. The only states where I had nothing to do with was in the South-West. Even on the phone, I was calling and giving banks instructions.”