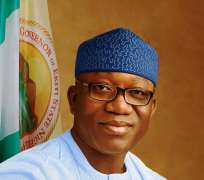 Dr Fayemi stated this when he received the President of the Nigeria Labour Congress (NLC), Comrade Ayuba Wabba, who paid him a courtesy visit in his office, in Ado-Ekiti on Friday.

The Governor, who explained that the N30,000 minimum wage was not a comfortable living wage for workers, said he was convinced that governors would pay if the Federal Government create the enabling environment for them to do so.

He, however suggested a collective approach by labour leadership, the government and the general public.

The NLC President, who met with the Governor together with some national and Ekiti State labour union leaders, had solicited the cooperation of all governors in the payment of the N30,000 minimum wage, adding that all states should be able to afford it. Fayemi said the issue of affordability was key, adding that Ekiti had always been paying above national minimum wage as the state is currently paying N19, 350 as against the N18,000 official minimum wage.

He however added that for Ekiti State to pay the new N30,000 minimum wage, it would need an additional N2 billion in addition to the current wage bill of N2.6 billion, totalling N4.6billion. This, he said is the case in many other states.

According to him, "I am not holding briefs for the governors because I am the youngest among them, having only come to office barely a month ago, so I cannot speak on what has transpired in your negotiation in the course of this tripartite committee, but I did not blame governors who believe that N30,000 is luxury salary for workers.

“There is no doubt in my mind that all the governor know that that cannot be a comfortable living wage and I have not had any single governor argue otherwise. If I were to put myself in the shoes of my colleagues, giving the fact on ground in Ekiti, I think it’s always the question of affordability, ability to pay.

"As long as we have a revenue allocation formula that we have in the country, even in states where you have willing partners and comrades that are not going to contend the N30,000 figure, if nothing is done about current revenue allocation, this will be tough on states.

"I think we need a collective approach to this beyond the game of numbers. The workers are very critical components to the productive base of our country, because it is the human capital and it has to be motivated human capital, it has to be an enthusiastic human capital that can deliver the goods to the populace.

"You are in a state that pays minimum wage of N19,350 which is above the current minimum wage. with an allocation of N3.2 billion last month and a wage bill of N2.6 billion leaving a balance of N700 million to do other things. I have just been basing my calculation on that, N30,000 and majority or at least half of our workers are below minimum wage now. If we were to pay the N30,000, we would require additional N2 billion every month." Fayemi said. Earlier, Comrade Wabba had lauded Fayemi for his administration’s demonstrated love for the workers welfare, especially the recent release of N200 million for teachers’ car and housing loans as well as the abolishing of development levies in public primary and secondary schools in the state, among others.

“We know your pedigree and I am not surprised about this. We know you are a friend of workers. In 2012 you are the first to pay the N18,000 minimum wage in the South West and second in Nigeria. You even paid N19,300” Wabba said.

The NLC boss also stressed the need for state government to ensure transparency and accountability to ensure that what is due to workers are given to them by blocking all forms of leakages that may bar them from paying workers what is due to them.

He expressed optimism that government would take all necessary steps at ensuring that the new minimum wage becomes a reality.