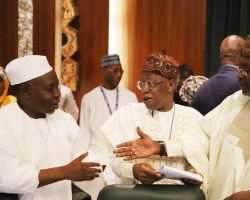 The Independent Corrupt Practices And Other Related Offences Commission (ICPC) has started investigations into an alleged misappropriation of N2.5 billion seed grant released to Nigerian Broadcasting Corporation (NBC) by the Federal Government for its digital switch-over programme.

The Minister of Information and Culture, Lai Mohammed, and the Director General of the NBC, Modibbo Kawu, were said to have allegedly approved payment to a private company for the digital switch-over programme, in contravention of a government directive that the such process should be handled by government-affiliated companies.

Though the funds were said to have been released, there was no evidence that the job for which it was released was carried out.

According to a statement issued on Thursday by the ICPC spokesperson, Rasheedat Okoduwa, the Federal Government was said to have released the sum of N10 Billion in 2016 to the Ministry Of Information And Culture for the digital switch-over programme which was aimed at migrating telephone lines from analogue to digital platforms.

To actualise the programme, a white paper was said to have been issued by the information ministry, directing that the process should be handled by government-affiliated Companies.

Two Companies were nominated to handle the process, one of which was ITS, an affiliate of the Nigerian Television Authority (NTA), and the Sum of N1.7 billion was said to have been released to it as a grant for the commencement Of the switch-over.

According to ICPC'S spokesperson, Rasheed at Okoduwa, investigations revealed that the process was fraught with alleged corrupt practices, as the NBC DG, Kawu, allegedly recommended a private company called Pinnacle Communications Limited, to the Minister, Lai Mohammed, to do the job.