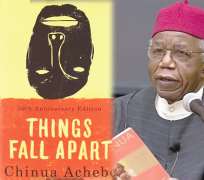 Chinua Achebe, prophet and great writer, who was born on November 16, 1930, will be remembered forever for what he did in 1958.

In 1958, Achebe’s first novel, Things Fall Apart, was released and he told the conflicted story of Okonkwo, communal life, clash of faiths, dynamics of the clash of cultures and more, set in pre-colonial and colonial Umuofia, of the Igbo nation.

In the assessment of U.S former President Barack Obama, it is “A true classic of world literature… a masterpiece that has inspired generations of writers in Nigeria, across Africa, and around the world.”

First, Achebe laid the foundation for the modern African literature. Whereby the stories and narratives about Africa and Africans hold our perspectives and values amidst the realities of a global market.

Princeton University's professor of philosophy, Kwame Anthony Appiah, hit the proverbial nail on its head when he said that “In every English and non-English speaking country on the planet, if you ask a student to name just one African novel, it is most likely to be Things Fall Apart by Achebe. It is the beginning of the African canon. it is difficult to think of anything else without it.” Like him, I believe Achebe’s works are rich fountains of knowledge for credible and engaging understanding of African pre-colonial, colonial and post-colonial history and realities.

On February 18, 2002, a distinguished jury of scholars and critics (from 13 countries of African life and literature) selected Achebe as the writer of the Best book, 'Things Fall Apart.'

Second, he firmed up the prologue for taking on the litany of Euro-Caucasian racist “scholars” who “objectified” Africa and African lives.

In Achebe's Things Fall Apart and other works, the centrality of Chi (God) attains an additional clarity in the Igbo cosmology. I've studied, lived and tried to better understand, essentially, the towering moral certainties which Achebe have employed in most of his works.

Also, it is a world which prefers a quasi-capitalistic business attitude to life while taking due cognizance of the usefulness of the whole, the community. .

Bottomline: in the Achebe accurate and contextual depiction of pre-colonial Igbo life, the rewards for hardwork/farming are wealth and family!

Third, in an era of grammatical overload, obscurantism and verbosity, he entered the arena with what I commend as the yet unmatched, uniquely Achebesque style and structure of simplicity, clarity, accessibility and organic lucidity. Achebe is good!

Prof. Achebe, Africa's most acclaimed and fluent writer of the English Language, our pathfinder, the intellectual godfather of millions of Africans and lovers of the fine art of good writing, was only 28 years when he wrote the classic, Things Fall Apart, in 1958, long before I was born.

Fourth, between 1958 and 2013, amidst a body of first rate works, he will be remembered as one of history's great witnesses and chroniclers. Other than 'Things Fall Apart' (1958), some of Achebe's other major books are 'No Longer at Ease' (1960), 'Arrow of God' (1964; rev. 1974); In 1983, Achebe wrote the often quoted pamphlet, 'The Trouble with Nigeria.' In the latter, he cited the litany of failures of the leaders and pointed the way forward; 'Anthills of the Savannah' (1987) and his notes and memoir on Biafra titled 'There Was a Country' (2012). Those works and his civic, moral conscience placed him on a pedestal which I characterize as the power and permanence of Chinua Achebe! Consequently, he lives in our hearts and minds as an immortal writer!

Fifth, on the critical questions regarding why Achebe become a writer; and why he wrote Things Fall Apart? He revealed: “In the end, I began to understand there is such a thing as absolute power over narrative. Those who secure this privilege for themselves can arrange stories about others pretty much where, and as, they like.”

For him, there's an organic relationship between writing as education and the building of a better society. Recall that the prolific Achebe wrote in 1975 in his work 'Morning Yet on Creation Day' that “The writer cannot be excused from the task of re-education and regeneration that must be done.”

I recall flying back to the U.S. (from South Africa to New York) to attend Prof. Achebe's 70th birthday at the historic Bard College (November 3-4, 2000) and its related conference titled, 'Home and Exile: Achebe at 70″. Achebe was in the midst of his friends and some of the best writers in the world. He mentioned “how everyone has spoken so nicely of me, this evening….” Then, came his one sentence punchline commentary on the gross grandiosity of African leaders: “If I were a military dictator, these two days of November would have been declared national holidays!” He burst into laughter. That's vintage Achebean sarcasm.

By the year 2020, USAfrica projects Achebe’s magnum opus, Things Fall Apart, would have been translated into 75 languages, and sold almost 25 million copies and listed among the world's best 50 novels.

In the full, honest context of the litany of calamities, catastrophes and crimes across Nigeria, Cameroon, Democratic Republic of Congo and many communities, may I conclude with the poem written in 1919 titled The Second Coming by William Butler Yeats (1865-1939) — from where Achebe gave the title for his 1958 novel:

“Turning and turning in the widening gyre
The falcon cannot hear the falconer;
Things fall apart; the centre cannot hold;
Mere anarchy is loosed upon the world,
The blood-dimmed tide is loosed, and everywhere
The ceremony of innocence is drowned;
The best lack all conviction, while the worst
Are full of passionate intensity”
Long live Chinua Achebe, the Eagle on the Iroko!
Dr. Chido Nwangwu, analyst on CNN & SKY news, moderator of the Achebe Colloquium (Governance, Security, and Peace in Africa) December 7-8, 2012 at Brown University in Rhode Island and former adviser on Africa business to the Mayor of Houston, is the Founder & Publisher of Houston-based USAfrica multimedia networks since 1993, first African-owned, U.S-based newspaper published on the internet USAfricaonline.com