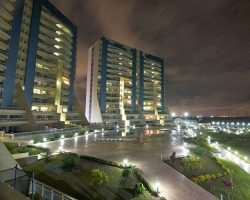 Owners of the mansions seized by the Economic and Financial Crimes Commission (EFCC) have been unveiled. They are former governors, ex-ministers, top military officers and businessmen.

Leading the pack is a former Minister of Petroleum Resources, Mrs. Diezani Alison-Madueke, who has forfeited some prized assets. Lost to the Federal Government by the ex-Minister are a multi-storey building in Banana Island Foreshore Estate in Ikoyi, Lagos; a real estate comprising six flats in Ikoyi and an estate of 21 mixed housing in Yaba, Lagos.

Many properties allegedly linked with Diezani have also been placed under interim forfeiture by the anti-graft commission. Also, the EFCC has secured the final seizure of Flat 7B at Osborne Towers in Ikoyi, Lagos where $43.45 million cash was recovered. The embattled former National Security Adviser, Col. Sambo Dasuki, has two properties in Kaduna and Abuja temporarily forfeited to the government.

The highlights of the forfeited assets were contained in a document, which The Nationstumbled on.

According to the Acting Chairman of EFCC, Mr. Ibrahim Magu, about 407 mansions were seized by the agency from 2015 to 2018.

He said: “Hundreds of properties such as filling stations, petroleum products, land, jewellery, automobiles, real estate, vessels, hospitals, company shares and heavy machinery and broadcast equipment, have been seized from corrupt elements between 2015 and 2018.

The document indicated that the EFCC is empowered by the law to place all suspicious assets under Interim Assets Forfeiture – in line with Sections 28 and 34 of the EFCC (Establishment Act) 2004 and Section 13(1) of the Federal High Court Act, 2004.

On the forfeited assets, Magu said they had been handed over to the Federal Government for use by Ministries, Departments and Agencies.

He said: “The ones (the assets) that have been forfeited finally to the Federal Government were those allocated to federal agencies to save cost because these government agencies spend a lot of money to rent properties.

“We tried as much as possible to avoid recourse to the auctioning of these assets. If you auction, you sell at peanuts. And the EFCC tried to distant itself from the auctioning of the forfeited properties. We have left the initiative of what to do with recovered assets to the Federal Government.

“As a matter of fact, I am not interested in any property. To me, to get the work done is the most important.”