Dr.Semogerere was a weak leader! 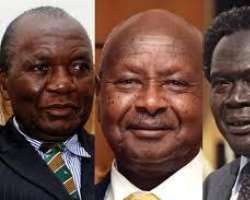 Dr.Paul Semogerere was just a DP icon and not a good one.These “front men” are a sad lot in politics.Most of them die of old age.Any “leader” without a strong following cannot do much harm.In fact, more political organisations are weakened at the expense of such leaders.

I can understand why Dr. Semogerere accepted to serve in Museveni or NRM transitional BROAD-BASED govt in 1986, but I can’t understand why there was never a written agreed road map between DP and NRM. Secondly, I can’t also understand why Semogerere never, in any way, supported his fellow DP, Wasswa Ziritwawula, when the later opposed the bill before the NRC to extend the NRM term in office. Yes, Semogerere wasn’t in the country when the Bill was being debated but he had been in the cabinet when it was presented and passed. Hurtingly, he came back to the country after it had been passed and quietly kept his position in cabinet as Ziritwawula resigned.

Is it possible that Semogerere knowingly or unknowingly contributed to the slow death of DP with the political moves he made in 1986-1990? Otherwise, you must give it to Museveni for keeping his enemies closer to him in 1980s-90s with a long term plan of ‘eliminating them. Even Adolph Hitler kept Robert Schumann, an apparent Jewish origin, on his side in his phoney fight with his Philistines, Prof. David Bargnesi. Semogerere was spineless and gullible, subsisting on a steady diet of Museveni and Obote lies. Obote several times rightly called him a ‘weak leader’. Museveni just used him whenever it was convenient for him.DP got the key ministries of Justice, finance, Agriculture, Commerce, housing and AG in Museveni’s broad based gov’t, and that was literally the end of DP. He insisted on being the minister of Internal Affairs in both Lutwa and Museveni govt but there was almost nothing to show for it.