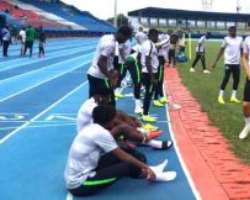 Captain Ahmed Musa and 21 other players took part in the Super Eagles' training on Tuesday at the Stephen Keshi Stadium in Asaba, the Delta State capital.

This is in preparation for Saturday's 2019 Africa Cup of Nations (AFCON) qualifying match against the Bafana Bafana of South Africa at the FNB Stadium in Soweto, Johannesburg.

However, France –based forward Samuel Kalu is expected on Wednesday.

Despite leading the group, Nigeria need at least a draw from Saturday's game to be sure of a slot at the next year's continental tournament.

Eagles will depart the country aboard a chartered flight from the Benin City Airport on Thursday evening.

They are expected to have a feel of the charming FNB Stadium on Friday afternoon by 3.30pm.

See some photos of the training session below;
Super Eagles prepare for their AFCON qualifying match against the Bafana Bafana of South Africa at the Stephen Keshi Stadium in Asaba, the Delta State capital on November 13, 2018. Photo: Twitter – @NGSuperEagles