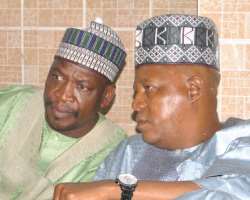 Following the emergence of Professor Babagana Umara Zulum as bonafide gubernatorial candidate on the platform of the ruling All Progressives Congress (APC) in Borno state, Concerned Youth Groups under the aegis of Borno Youth Progressive Alliance (BOYPA) and National Association of Nigerian Students (NANS) have promised to give their unflinching support to ensure that the party win the forthcoming gubernatorial and other political offices in 2019 general election.

The Groups however appealed to the Leader of the APC and outgoing governor KASHIM SHETTIMA to retain the current Deputy, Usman Mamman Durkwa as a running mate to Professor Zulum, having spent only three years as Deputy Governor under the present administration, following the demise of the former Deputy Governor, of Blessed Memory, Late Zanna Umar Mustapha in 2015 at an official engagement in Yola, Adamawa state.

The calls were made barely 24 hours after the Independent National Electoral Commission (INEC) started publishing names of gubernatorial candidates and their running mates on different political party platforms across the states of the federation, while that of Borno, especially the running mate to APC guber Candidate, Professor Zulum is officially unknown.

Comrades, Umar and Sarki said, the Youth Groups who were drawn from the 27 Council Areas across the state, are ever ready to contribute in no small measure by mobilizing, convassing votes and ensure it keys into the 'Door to Door Campaign' policy for Zulum to emerge victorious, especially if Durkwa would be given the opportunity to become the running mate to Zulum.

The groups however quoted governor SHETTIMA, the leader of the ruling APC in the state, who had at different fora revealed that, should any of the aspirants emerged as APC gubernatorial Candidate, Durkwa who would be serving for only three years as Deputy under the second tenure of Shettima, would be given automatic ticket to run as Deputy on the same party platform come 2019.

Their words: "We congratulated governor Kashim Shettima and our new brand Gubernatorial Candidate, Professor Babagana Umara Zulum and all other candidates who won various positions in the just concluded Indirect Primaries of great APC.

" The Governor who is the leader of our great party has pledged to retain the current Deputy Governor to become a running mate to Professor Zulum come 2019 general elections, otherwise, the Deputy Governor, Usman Mamman Durkwa would have contested for either Senate or House of Representatives on leaving office.

"Of all APC governed states of the federation, no Deputy Governor was dropped. In such situations, the Deputy was optioned to contest various elective positions".

Citing example with Gombe who lost his Deputy was retained to contest in 2019 with the new governor.

" We therefore urged Governor Shettima to fulfil his promise to his Deputy having spent only three years in office with absolute loyalty to this administration and the Governor himself.

"Selection of a Deputy Governor is not a unilateral decision, but to be a collective one involving stakeholder's views.

"This will go a long way in clinching all political offices in the state by our great ruling party." Comrades Umar of BOYPA and Sarki stated.

Unfortunately, insinuations are ripe that the running mate to Zulum may be restricted or picked from any other Local Government Area in Southern Borno Senatorial District, but not in Hawul LGA where the current Deputy hails from.

The groupd also used the opportunity to appeal to some of the aggrieved APC gubernatorial aspirants, including brother to the Deputy Governor, Alhaji Idris Durkwa who scored the second highest votes in the just concluded Indirect Primaries to as true Democrat, consider withdrawing his petitions at the federal High Court of Nigeria, challenging the outcome of the APC gubernatorial primaries to allow peace to reign in the ruling party come 2019 general elections.

The groups also commended the present Deputy Governor, Usman Durkwa for his loyalty not only to his Boss, Governor SHETTIMA, but the entire ruling APC, for not aligning with his brother, Alhaji Idris Durkwa's aspiration due to his allegiance and oath of office.