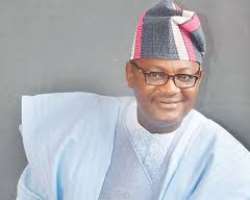 Former President of Nigeria, Chief Olusegun Aremu Obasanjo on Saturday endorsed the candidacy of Gboyega Nasir Isiaka, GNI, saying he will be the next governor of Ogun State.

Obasanjo, who was addressing the African Democratic Congress (ADC) during the presentation of the gubernatorial candidates, GNI and his running mate, Mrs Bolade Okeowo by the party said GNI had the quality to become the next governor of Ogun State which he would surely be.

According to Obasanjo, “I will continue to do what is good for the country till I die. I am not a man of ADC; I am just a guide and adviser also to PDP and APC and SDP. Whoever comes around, my doors are open.

“GNI, I believe you are a good product and your running mate; but don’t sleep, you have to work hard. We have a peculiar situation in Ogun State since creation and the situation is that the East has democratically produced governors twice, also the Central but the West has not produced any. One of the things I usually hear is that they have no people, how there you say that?

“No section of this country has monopoly of good people. I have maintained that it is time for the people of the West to be given opportunity to provide the governor,” Obasanjo stated.

However, the former president said God had not created Nigeria to be rudderless or poor.

“Where you are today both at the state and national level is by the grace of God. I believe that God has decided that things will change for good in Nigeria. Some people are in despair due to the situation of things in the country, it is understandable.

“I believed then, when we were confronted with bad situations in this nation, we should sit back and think and look at the situation and ask ourselves, what is wrong? and when we have ascertained what is wrong, what can we do to correct what is wrong?” He asked.

“One thing is to think of what to do, another is to do something about it which is very important. We have gone from that statement making to the adoption of a political party because movement is an activism but in the context of moving Nigeria forward, our Constitution only allows political parties to be the instrument and when we did the assessment we decided to come up with a political party for the yearning Nigerians and for the betterment of Nigeria.

“We have made so many mistakes in this country that should have stopped Nigeria from existing but that has not been our lot. Some are going from PDP to APC and back to PDP, in the short run we have no choice but in the long we have choice because we cannot be running here and there and expect transformation. We have to get out of where we are and the only way to get out is through what you have in your hand, your party. If your party do things the way other parties have done things in this country, it will not create a new channel for Nigeria so you have to be different and that is why the movement adopted ADC,” he advised

The State Party Chairman of ADC, Kolade Osinowo earlier in his address said the party had taken a significant step to form the party ADC after CNM was formed, saying the party had come to pay homage for the former President to encourage them.

“After we formed CNM you took a significant step forward and formed ADC, ADC was number 75 or 85 in the list of political parties when it was formed it later became number 20 but now ADC was rated number three in Ogun State that means after APC and PDP, ADC is next. Without doubt , ADC is number one in Ogun,” he said.

Speaking, Isiaka promised to do the necessary things to make Obasanjo and the people of Ogun State happy when he becomes the governor of the state.

“We will do what it is to be done, so that we will not disappoint you (Baba), the party and the people of Ogun State. We will go back to replace, restrategise ourselves so you will be proud of us,” he said.