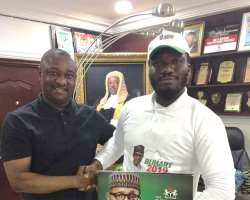 Dr. Doyin Okupe, a member of the Peoples Democratic Party (PDP), is an ardent supporter of Alhaji Atiku Abubakar for the 2019 presidency.

In a letter he sent to Festus Keyamo, Buhari’s campaign aide, the young Okupe, who is a lawyer, begged to join the campaign team of Buhari to ensure the president’s victory in 2019.

He described Buhari as the best candidate for the top job, adding that everything must be done to prevent the PDP and its cohorts from returning to power next year. Reacting to his son’s decison to join the Buhari campaign team, Okupe tweeted: ”Ditan okupe is my Son. He is a very brilliant young man. He went to Kings college, Lagos, Burkinham university, UK & did post graduate in law at theLondon school of economics. We both have had serious issues in the last 5yrs.This may be his way of getting back at me. I wish him luck.”