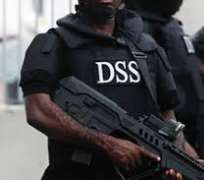 The Kaduna State Command of the State Security Services (SSS) said it had arrested six suspected kidnappers and killers of Agwom Adara, the paramount ruler of Adara Chiefdom in Kaduna, Mr Maiwada Galadima.

The Director of the Command, Mr Mahmud Ningi, made the disclosure when he paraded the suspects before newsmen on Wednesday in Kaduna.

According to Ningi, on Oct. 19, a gang of armed hoodlums blocked the road near Idon village in Kajuru Local Government Area and robbed commuters.

“Unfortunately during the operation, the convoy of the late Galadima, ran into the hoodlums who subsequently abducted the Monarch, his wife Victoria, and driver, Timothy Katari.

He also recounted that three days later on Oct. 21; the wife of the Royal father was released by the kidnappers, presumably because of her deteriorating health condition.

“Subsequently, the kidnappers contacted the family by getting numbers from the monarch’s wife’s phone which was confiscated by the abductors and demanded for N100 million as ransom.

“Unfortunately in spite of the intense negotiations, five days later, on Oct. 26, the Royal father was killed by the abductors after receiving N6.850 million from the family,” he said.

The Director said the service had been keeping track of the activities of the criminals during the negotiation but could not make arrests as it had to consider the safety of the victims.

He also disclosed that immediately after the monarch’s body was discovered, the service tracked down and arrested six members of the syndicate at different locations across the State.

“During the preliminary interrogation, they made confessional statements about their involvement in the crime.

Others were Adam Isya, 25, a suspected cattle rustler for the past five years, Yusuf Bello, 32, Dahiru Bello, 28, and Mohammed Aminu, the supplier of arms to the gang.

Ningi assured Nigerians that the service will ensure proper prosecution of the suspects, while efforts were being made to arrest other members of the gang.

“I will like to use this opportunity to thank the military who provided necessary support during the operation; as well as other security agencies,’’ Ningi said.