How N28.2b was looted from the Ecological Fund: AGF 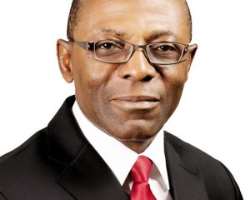 Ecological fund is meant to fight disasters, but looters have dipped their hands into it, report Yusuf Alli and Moses Emorinken, Abuja

SOME of the abuses of the multi-billion naira Ecological Fund have been laid bare by the Auditor-General of the Federation (AGF).

About N28.286billion was deducted from the fund in 2016 for activities not related to development of natural resources, Mr. Anthony Ayime has said.

But the AGF said the N28.286 billion was paid out as a loan to execute unrelated activities.

Also, the AGF indicted the nation's embassies in Germany, Ireland, The Netherlands and in Britain.

These discoveries were contained in the AGF's 2016 Audit Report, which has been presented to the National Assembly for consideration.

The report said: “The Ecological Fund was set up for the amelioration of general ecological problems in any part of Nigeria. Examination of records presented for audit revealed that the sum of N26,286,790,023.51 was credited to the Ecological Fund as the required 2 per cent deduction from the Federation Account in the year 2016.

“Examination of FAAC records revealed that a total amount of N48,601,928,311.08 was received into the Ecological Fund in the year, as the required 3.0% deduction from the Federation Account for the Development of Natural Resources.

It was observed that N28,239,060,570.89, representing about 58%, was paid out of the Fund as loan for various activities that are not related to development of natural resources.

“We recommend that henceforth, the Federal Government deploys these special funds only for the stated objectives of the Funds.

”We note that the various withdrawals from Funds by the Federal Government are stated to be borrowings.

“We, therefore, further recommend that arrangements are clarified immediately, for the repayment of any funds not disbursed for the prescribed purposes of these Funds.”

In its review of the activities of the Department of Petroleum Resources(DPR), the AGF accused oil firms of not paying about $26,262,667.15 royalties.

“A detailed explanation was requested for the outstanding Receivables due to DPR as at December, 2016 and ultimately to the Federation Account.

“The Director DPR has also been requested to expedite efforts towards the recovery of all outstanding Royalties, and to forward the updated status to this Office for verification,” the report said.

The AGF also indicted the nation's embassies in Germany, Ireland, The Netherlands and in the United Kingdom.

The report added: “During the audit examination of accounts and records of Nigeria Embassy, Berlin, Germany, the following observations were made:- (a) Vote books maintained for Personnel Cost at the Embassy, revealed that the total amount received and verified on the US Dollar Account in 2015 was N463,435,150.69, which translates to $2,637,097.66 (two million, six hundred and thirty-seven thousand, ninety-seven dollars, sixty-six cents). The accumulated expenditure recorded under Personnel Cost, as at the last posting date of December 18, 2015, amounted to N164,541,521.04  thereby leaving a balance of N298,893,629.65  which was not accounted for. There was no disclosure in the Vote book, of how this fund was expended.

“The Permanent Secretary was requested to account for the balance of N298,893,629.65 or refund the amount to Treasury and forward treasury receipt for verification.

“Audit examination of the US Dollar Account Bank Statement for 2016 Personnel Cost to the Nigeria Embassy, Berlin, Germany revealed funds totaling $1,710,324.35 equivalent to N335,357,629.10, appearing on the specified dates.

“However, from the funds released, it was observed that:

“The Permanent Secretary should justify the over-expenditure of N69,349,489.08  or refund the amount to chest and furnish evidence for verification.

“During the audit examination of the Bank Reconciliation Statement presented by the Nigeria Embassy, Berlin, Germany, the following observations were made:

(i)  Debits in Bank not in Cash book totaling €25,618.82, which should have been expeditiously cleared through reconciliation, were carried forward over several months in the Bank Reconciliation Statement.

“This was contrary to the provisions of Financial Regulation 807, which states that “Sub- Accounting Officers will ensure that all outstanding items in the Bank Reconciliation Statement are cleared expeditiously.

“The Mission failed to prove that the payment did not emanate from it, otherwise bank would have been held responsible and value would have been gotten. Therefore, this was perceived to be fraud and needed to be thoroughly investigated.

“Some lodgments of funds made to the account were usually not reflected in the cashbook, hence making it difficult to ascertain the total amount received by the Embassy as recorded in the cashbook by the Finance Attaché.

“The Permanent Secretary was requested to ask the Ambassador, the Head of Chancery and the Finance Attaché to refund a total sum of €4,327,528.35 to chest, with the receipts forwarded to my Office for verification. No response was received.

“Also, a high powered investigative team should be constituted to conduct an in-depth investigation to ascertain the reasons for the continued understatement of the amount that is standing as balancing figure in the Bank Reconciliation Statement for the period under review. They should be mandated to investigate the way and manner funds are deducted from the accounts of the Embassy without due approval and due process.

“The Finance Attaché should be properly trained on the preparation of Bank Reconciliation Statement as provided in Public Sector Accounting and Financial Regulations 806 and 807. The Permanent Secretary should confirm action on the above issues.

“During audit inspection of properties owned and maintained by the Nigeria Embassy Berlin, it was observed that the Federal Government owned a property in Bonn with the following information: Vulkanstr 69, 53179 BonnLocated in District of Mehlem, Plot 154, Compound and Building with 5446 Square Meters.

“Audit enquiry revealed that the property has not been in use, yet the Embassy continues to incur huge maintenance costs on it.

“The issues raised were communicated to the Permanent Secretary through my Audit inspection Report Ref. No. SMEA/OAuGF/AIR/BERLIN/2016/Vol.1/1 dated 25th January 2017. No response was received from the Ministry.”

Regarding the nation's embassy in The Netherlands, the AGF said about N40,579million was missing in transit from the Ministry of Foreign Affairs to the mission in The Hague.

It said: “During the audit inspection of the books of accounts and records maintained by the Nigeria Embassy at The Hague, Netherlands, the following observations were made:-

(a)           Funds for Overhead expenditure in 2015 totaling N40,579,035.00  could not be traced to the Mission's Overhead account. The Ministry of Foreign Affairs confirmed the release of this amount to the Embassy as follows:

There is an urgent need to investigate properly, the whereabouts of the N40,579,035.00 claimed to have been remitted by the Ministry, but not received at the Embassy, at The Hague.

The Permanent Secretary was requested to establish the true position of the N40,579,035.00  purportedly transferred, recover the funds to chest and forward evidence for verification. No response was received on this matter from the Ministry.

(b) The Nigerian Foreign Service Regulation 29 stipulates: “Every Nigerian Diplomatic or Consular post shall be stocked with reference and operational hand books which are designed to serve as works of reference for effectiveness of the missions”. A test for compliance with this regulation revealed that the Nigeria Embassy at The Hague was not complying.

“A bookshelf found in one of the offices was in a state of neglect and filled with old stocks. There was no evidence that it had been put to use in recent times. The following observations were also made:

(i)  Books and magazines in the library were not properly stocked.

(ii) The books were neither indexed nor catalogued;

(iii)   There was no Register for the few available books. There was gross lack of control and this could give room to pilferages;

(iv)    The accounting records revealed that N233,993.00 was received between 2015 and November, 2016 for the purchase of books and magazines. The amount was evidently not utilised for the intended purpose.

“The Permanent Secretary was requested to ensure that:

(i)    The Mission desists from diverting funds meant for books and magazines;

(ii)   The Mission updates its stock of books and magazines.

(iii) All the books are properly catalogued and indexed, in accordance with modern library standards.

(iv)  A well trained staff is appointed to supervise the library.

“The issues were communicated to the Permanent Secretary, Ministry of Foreign Affairs through my Audit Inspection report Ref. No. SMEA/OAuGF/AIR/HAGUE/2016/VOL.1 dated 31st January, 2017. The Permanent Secretary should confirm that recommendations (i)-(iv) above have been implemented.”

The AGF also confirmed that as at 2016 when the audit was carried  out, the Embassy of Nigeria, Dublin, had no bank account in Ireland.

”At the Embassy of Nigeria, Dublin, Ireland, the following observations were made:- (a) The Mission did not maintain any bank account in Ireland during the period under review due to foreign exchange regulations and challenges associated with currency conversion from US Dollars to Euros. However, it operated 7 (seven) bank accounts with a commercial bank in London (UK). Documents relating to 5 (five) of the accounts were presented and examined while documents relating to the other 2 (two) accounts were not presented for audit inspection.

“The Minister/Counselor (Consular), who controls the 2 (two) accounts, insisted that the accounts were not subject to audit, contrary to the provisions of Section 85(2) of the Constitution of the Federal Republic of Nigeria, 1999 and Financial Regulation 110.

“Similarly, the 2016 Vote books presented for audit were not maintained as stipulated in the Financial Regulations. Only entries in respect of Overhead costs AIE No. MFA/MS/OH/027/2016 and the expenditure arising therefrom, dated 22nd July 2016 were made, but not according to the columns of the Vote Book. Aside these entries, there was no other entry in the Vote book, either before or after 22nd July, 2016.

“The amounts were purportedly borrowed by the mission for payment of local staff and to meet other sundry expenditures. This is contrary to Financial Regulation 223 which emphasizes accountability in full of all revenues received. Hence, the Permanent Secretary was asked to remit these revenues to the appropriate government account and forward the remittance particulars for my verification. No response was received.

“The monthly wage bill of the local staff of the Embassy which stands at €12,712.00 (Twelve thousand, seven hundred and twelve Euros (N2,763,478.26) fortnightly does not reflect the economic realities of the present times. Where certain services could be obtained as the need arises, the Embassy went ahead to engage them on permanent basis such as legal services where a lawyer was recently employed.

“ Accounting officers are expected to abide by the provisions of Financial Regulation 415 which requires exercise of due economy in all government expenditures. The Permanent Secretary was advised to disengage these excess staff and revert to hiring their services only when the need arises.

“The Permanent Secretary was asked to verify these debts with a view to timely settling them, as this is portraying the Embassy in bad light, especially with its service providers.

Findings by the AGF indicated that the Nigerian Mission in the UK, one of the oldest, was not spared of the rot.

Auditors discovered that the staff strength of the mission was over-bloated and £1,528,171.48 could not be accounted for.

The report said during the audit inspection of the Nigerian High Commission, London, United Kingdom, it was discovered that the staff strength of the Mission was over-bloated, especially the local staff who numbered 106 as at the time of inspection in November, 2016. Arbitrary and discretionary engagement, deployment and placement of local staff were observed in most cases, among other anomalies. NATION