Senator Ekweremadu: Our mission was to steal and not assassination – Suspect 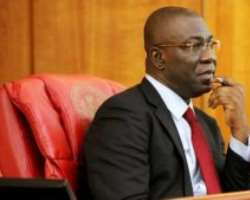 Mohammed Yusuf, 25, the principal suspect in the alleged assassination attempt on Deputy Senate President Ike Ekweremadu, has confessed that they only were on a mission to steal and not for assassination.

“We did not go to the residence of Ekweremadu to assassinate him or anybody in the house,” he said.

He told newsmen that he had been stealing for five years without using gun and that his colleague, Dan Ali, escaped while he was caught.

The confession of Yusuf may have corroborated the preliminary investigation that the attack on the home of the top senator was not an assassination attempt.

The police arrested four of its personnel on duty at the residence of Ekweremadu and also one personnel of Nigeria Security and Civil Defence Corps (NSCDC) who were on duty at Ekweremadu's home at the time. Ekweremadu, according to reports, narrowly escaped an alleged attempt on his life in Abuja on Nov. 17, 2015.

The Force Public Relations Officer, Mr. Jimoh Mohood, said that those arrested were being investigated.

He said that there was no cover-up by the police in the investigation of the crime.

“The four policemen and one personnel of the NSCDC on duty at the residence of the deputy senate president at the time of the incident have been arrested and detained,” he said.

The Force spokesman said that it was not correct that the police responded after seven hours when the incident had occurred.He said that further investigation had showed that the incident was not an assassination attempt on the life of Ekweremadu.

“Update on further investigation did not reveal assassination attempt but a burglary attempt,” he said.

He added that the investigation so far revealed that the suspects in the case did not have idea that the residence belonged to the deputy president of the senate.

Moshood said that efforts are being intensified to arrest the second suspect, Dan Ali, who escaped from the scene of the crime.

He said that the Inspector-General of Police, Ibrahim Idris, had directed the upgrade of Apo legislative quarters outpost to a divisional police headquarters.

Others to be upgraded, according to him, are Supreme Court, Kabusa and Trademore estate.

He explained that the upgrade was to reduce crime and criminal acts in the affected areas and improve police visibility in the FCT.