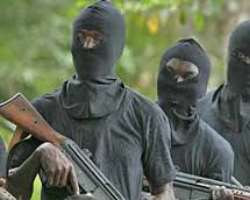 Men of the underworld, heavily armed to the teeth have kidnapped four Catholic priests in Delta State.

A colleague priest in the Catholic Diocese of Issele-Uku informed The Nigerian Voice that the priests were kidnapped on Wednesday by gunmen between Agbor and Umutu axis of the State on their way to Uhielle in Ekpoma, Edo State for an alumni meeting when the hoodlums swooped on them and took them into custody.

While soliciting that prayers should be intensified for God to continue to protect the clergy from every seen and unseen evil, he said the abductors were yet to make contact, noting however that the Catholic Church does not encourage payment of ransom to free kidnapped victims.

He further expressed worries that the clergy has become endangered specie as innocent and harmless priests and nuns have become ready targets for men of the underworld.

The Police Public Relations Officer (PPRO), of the state police command, DSP Andrew Aniamaka, confirmed the kidnap but could not give further details.

Aniamaka said it was not yet ascertained if the victims were kidnapped in Delta State or at Urhonigbe in neighbouring Edo State, adding however that investigation was in progress to unravel the circumstances of the kidnap saga and bring the perpetrators to book.