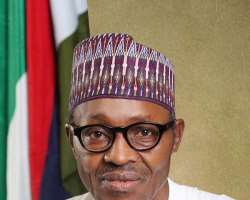 "We are trying to organize the country. The extent of mismanagement we met when we came was mind-boggling," President Muhammadu Buhari has said.

Receiving a group from the South-east part of the county under the aegis of One on One Nigeria, Tuesday night, the President added:

"Many times, I have spoken about the tremendous resources available to us between 1999 and 2014, and how it was frittered. If only they had used just 25% of it on infrastructure; road, rail, power, Nigerians would mind their own businesses, and not bother about whoever was in power. The casualty figure on our roads daily is simply scandalous. No wonder they are in opposition now, despite all the power they thought they had."

The group, led by Chief Chido Obidiegwu, said it had keenly observed the strides of the Buhari administration nationwide, particularly in the South-east, "and it is now payback time."

According to Obidiegwu, "We have seen the work being done on the long-abandoned Second Niger Bridge, roads are being constructed in many parts of the region, and we believe there is every reason to support you for a second term."

Describing President Buhari as the "grandfather of war against indiscipline and corruption, nightmare of insurgents, Mr Food Security, consolation to pensioners, and Mr Frugality," the group said it was going to mobilize South-easterners to massively vote for him, believing that one good turn would then deserve another in 2023.

The One on One Nigeria promised to mobilize youth groups, women, artisans, traders, religious groups to massively vote for President Buhari, adding that it had all it takes – “courage, drive, verve and vitality."

Seven men and two women represented One on One Nigeria during the visit.