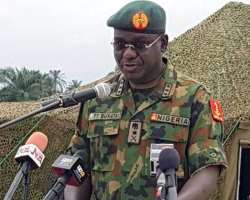 (Chima Ubani Center, Onitsha Nigeria: 6th November 2018)-The Nigerian Army is totally an aberration or meddlesome interloper in the policing and management of democratic free speeches in the present democratic dispensation in Nigeria. The Army is also an uninvited and unwelcomed corporate cop in the democratic policing and management of the country’s internal security; except in the Boko Haram insurgency affected areas of the Northeast where its intervention and services are rightly, constitutionally and democratically needed.

This position of ours is sequel to recent threats of more killings by the Nigerian Army following its killing of “at least 49” and “as much as 60” unarmed and defenseless members of the Islamic Movement in Nigeria or Shiite Muslims during the latter’s annual religious procession in Abuja. The Nigerian Army, as expected, not only mangled the casualty figures and brutally distorted facts of the matter, but also relied on a recent personal remarks of President Donald Trump on immigration crisis in US-Mexican border, as justification for its (army) dastardly acts.

As if that was not enough, the Nigerian Army issued a statement days later, threatening more killings; saying “it did not have rubber bullets” to use against unarmed Nigerians including Shiites and pro Biafra agitators engaging in democratic free speeches including street protests and religious processions as well as other innocent and defenseless citizens going about their legitimate businesses; in the event of any slight dispute or encounter or contact with the soldiers of the Nigeria Army.

It is therefore safe to submit here that the continued hard stance and crude, unprofessional and vindictive conducts of the Nigerian Army are dangerously raising fears of possible emergence of four or more new insurgencies in the country. Specifically, the Army’s despicable and condemnable policy of militarism and militarization including violent crackdowns such as mass killing and maiming of unarmed and defenseless ethnic and religious groups and individuals in the country are capable of facilitating group radicalization and militancy leading to emergence of new sophisticated insurgencies.

The continuation of killing and maiming as well as persecution of unarmed and defenseless members of the Islamic Movement in Nigeria and the pro Biafra groups by the Nigerian Army and the present central Government of Nigeria is already having dire consequences on Nigeria and may most likely result in eruption of more insurgencies in the country; beyond managerial and military capacities of the present central Government or another that will come on board in near future.

This is factually and irrefutably because the unarmed Shiites and their religious sect (Shiite Islam) are globally noted as foremost Islamist political revolutionaries in the world including founding of the present Government in Iran since 1979. The Islamic Republic of Iran is indisputably one of the world most dangerous countries. The pro Biafra groups, on their part, are largely drawn from the People of Igbo Ethnic Nationality, one of the most sophisticated ethnic nationalities in the world with conspicuous presence in over 88 countries of the world including world leading military powers.

This is not to forget to mention the People of the Niger Delta, the economic surviving hub of Nigeria. If any of these socio-religious groupings is pushed by the Army to the wall of intractability, the ongoing Boko Haram insurgency will be a child’s play. This is more so when the present Nigerian Army and its commanders is independently rated one of the most unprofessional, outdated and butchery armies in the world. The latest warning of ours is one of several warning given to the Army and the Government of Nigeria since 2015 following massacre of hundreds of unarmed and defenseless Shiites and pro Biafra activists in Zaria and old Eastern Nigeria; with their killers shielded from accountability till date.

The Nigerian Army has since mid 2015 usurped the country’s internal security as “uninvited police” and flooded its untrained and unprofessional soldiers in all the 36 States and FCT without anything to show for it. The critical analysis of the patterns and trends of the internal security challenges in the country by Intersociety in the past three and half years or since mid 2015, clearly shows that Nigeria’s internal security has gone from bad to worst despite the present central Government’s militarism and militarization policy including flooding of soldiers in all nooks and crannies of the country with recklessness of crude acts and unprofessionalism of soldiering.

Available statistics have further shown that the Nigerian Army, by its war-like and vindictive treatments of defenseless Nigerians and poor involvement and handling of the country’s internal security; is a serious threat to the survival and sustenance of Nigerian democracy including democratic free speeches, human rights and rule of law. The Army, by its crude and unprofessional involvement and handling of the country’s internal democratic security, is steadily pushing the country on the brink; capable of eruption of teething group radicalization and pushing the country into more intractable insurgencies.

We therefore make bold to say that the Army is dangerously breeding two or more insurgencies in old Eastern Region of Nigeria (Southeast and South-south), one or more in the Middle Belt and another most dangerous one in Kaduna State or in its neighboring State. With staggering population of over 180m, Nigeria can never survive waging insurgency wars in four or more fronts at the same time, in addition to the ongoing devastating Boko Haram insurgency in the Northeast and Fulani jihadist violence in the Middle Belt.

In all the non war killings perpetrated by the Nigerian Army since December 2015, no single soldier lost his or her life as against no fewer than 1,660 unarmed and defenseless members of Shiites (1,180) and pro Biafra groups (480) as well as 1300 members of the two unarmed groups shot and critically injured. These killings got worst and escalated because the foot and vicarious perpetrators are allowed to continue walking free in the streets by the Government of Nigeria. Totality of these has thickened and deepened the impunity and audacity of the perpetrators to kill more and boast of being untouchable before God, law and man.

By the account of Intersociety, dated 2nd July 2018 and its updates, dated 31st October 2018, the Nigerian Army operating under “the Armed Forces of Nigeria” had in the past three and half years carried out or facilitated the non war killing of: (a) 1, 180 unarmed and defenseless members of the Islamic Movement in Nigeria or Shiites between 12thand 14th December 2015 and 27th, 29th and 30thOctober 2018 in Zaria, Abuja, etc and (b) 480 unarmed and defenseless pro Biafra activists and innocent others in Southeast and South-south between 30thAugust 2015 and 14th September 2017; totaling 1,660.

That is to say that the Nigerian Army had in the past three and half years killed total of 2,345 unarmed and defenseless citizens both in non war and war crimes’ situations. The two atrocity or heinous crimes clearly constitute crimes against humanity and war crimes punishable under international law including the Geneva Conventions of 1949 and the ICC Statute of 1998; all signed and ratified by Nigeria. Till date, no single perpetrator of these atrocities has been held by the Nigerian Government or international community to account for same.