No Going Back On Tuesday Strike - Labour

Labour Leaders shun meeting with FG,
By The Nigerian Voice 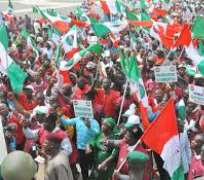 The Nigeria Labour Congress has said it will go on with the nationwide strike action scheduled to commence on Tuesday.

no longer
NLC, which is one of the umbrella bodies for workers, said Sunday it would no enter into any negotiation with the government on a minimum wage for workers.

The General Secretary of the NLC, Peter Ozo-Eson, who spoke during an interview with The PUNCH on Sunday, “The strike is going on. Nothing has changed. The strike will begin on Tuesday. That is the directive that has been given. It will be a total strike.”

Asked if oil workers would join the strike, Ozo-Eson said, “All trade unions in the country have agreed to go on strike and we expect every union to go on strike from Tuesday.”

On negotiations between the Congress and the Federal Government, Ozo-Eson said, “Negotiations have ended. Yes, we have a meeting of the tripartite committee on Monday and we will attend as long as it is to sign the report of what has been agreed. We will sign that so that it can be submitted to the government. We will not change our position.”

The position of the workers is in spite of a National Industrial Court's Friday ruling, restraining workers from shunning work until the determination of a suit instituted by the federal government on the dispute over national minimum wage.

The Attorney-General of the Federation and Minister of Justice, Mr. Abubakar Malami, had approached the court on Friday and asked it to stop the strike, pending the determination of the substantive suit the federal government had filed.

The court obliged him with a restraining order, putting the strike on hold.

But organised labour said having not been served with any court process, it was unaware of the court ruling, therefore, the tomorrow's strike shall proceed as planned.

Labour also denied knowledge of a meeting held at the office of the Secretary to the Government of the Federation (SGF) and attended by the SGF, Mr. Boss Mustapha, and Minister of Labour and Employment, Senator Chris Ngige.

Workers under the aegis of the Nigerian Labour Congress (NLC) and Trade Union Congress (TUC) had threatened to go on national strike to compel the government and the private sector employers to pay N30,000 as new minimum wage.

Whereas the federal government has offered to pay N24,000 and state governments, N22,500, labour has insisted that it is either N30,000 or no deal.

Following the deadlock, the federal government approached the National Industrial Court of Nigeria (NICN) in Abuja and obtained an order restraining the organised labour from proceeding with the nationwide strike.

Delivering ruling in an ex-parte application by the Attorney General of the Federation (AGF), Justice Kado Sanusi restrained the NLC and the TUC from engaging in the proposed strike pending the determination of the substantive suit filed by the federal government and the AGF.

Justice Sanusi also restrained the NLC, TUC and the Incorporated Trustees of the Nigerian Governors' Forum listed as the first to the third defendants from taking steps capable of destroying the subject of the dispute.

Meanwhile, labour and all its affiliate unions yesterday sent out messages sensitising its members and Nigerians on the rationale for the industrial action.

In a statement signed by the Chairperson of Joint Action Force (JAF), Dr. Dipo Fashina, and General Secretary, Mr. Abiodun Aremu, the unions said the current demand for a new National Minimum Wage has gone beyond the stage of negotiation.

The statement said the N30,000 agreed at the Tripartite Committee, which is even very poor (at $83 per month compared to 1981 Minimum Wage of N125 at $250), represents an irreducible minimum for industrial peace.

According to the statement, “What is clear today from the unnecessary tensions being generated in the polity by the APC Looters' Government and its officials is that none of the 36 state governors and the federal government, irrespective of political parties (APC, PDP and APGA), like in the past struggles for upward review of wage, is committed to pay the minimum wage without being compelled by struggle to do so.

“JAF therefore challenges the presidency, state governors and legislators in the national and state assemblies to forfeit the questionable security votes/ undisclosed allowances, and cut down their outrageous total packages, and salaries and allowances of other political office holders in order to free up more resources that can be used not only to augment the cost of the new wage, but also the provision of social welfare programmes, such as free and quality education and free and adequate health care.”

The unions said that as a regulator, the federal government has a responsibility to enforce compliance of the minimum wage on both public and private employers of 50 employees and above. They said that the government should call the Minister of Labour and Employment, Dr. Chris Ngige to order and to stop spreading falsehoods and deepening the tensions in the polity.

“JAF wants to alert and urge organised labour and Nigerians to further demand that the N30,000 new minimum wage must be implemented to the fullest, without retrenchment and the arrears of salaries and allowances owed on the basis of the 2011 Minimum Wage Act must be paid.

“JAF takes strong notice of the manipulative court injunction obtained by the federal government on Friday November 2, 2018, with the criminal intent to undermine the impending strike action, but JAF is resolved that the strike action must continue.”

FG awaits tripartite committee report
But the federal government has said that the Tripartite Committee on the national minimum wage set up November last year will meet today and submit its reports to President Muhammadu Buhari for consideration.

The SGF, Mustapha, disclosed yesterday at the continuation of the Reconciliation Committee meeting between government and labour, which started on Friday.

But the NLC shunned yesterday's meeting that had in attendance the federal government representatives, the Organised Private Sector and the National Salary and Income CommissionNgige, and the Minister of Finance, Mrs. Zainab Ahmed, went into a technical session after the reconciliation committee sitting.

NLC shunned the meeting, claiming it was not informed it was taking place.