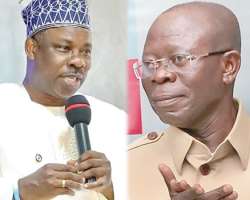 Gov. Ibikunle Amosun, governor of Ogun state, has stated that Adams Oshiomhole, chairman of the All Progressives Congress (APC), is planning to hijack the state government.

Amosun, in a statement by Adedayo Adeneye, the state commissioner for information and strategy, declared that the actions of Oshimhole may lead to the downfall of the party.

Amosun fell out with the party’s national working committee (NWC) after it chose Dapo Abiodun as the state’s gubernatorial candidate against Amosun’s preferred candidate, Abiodun Akinlade.

“Nigerians will recall that Oshiomhole himself was elected National Chairman of the APC by consensus arrangement which witnessed all other contestants to the office being prevailed upon to step down for him,” the statement read.

“The ground on which Oshiomhole disputes the gubernatorial primary in Ogun state is that the result was not announced by the electoral committee from Abuja, therefore the governor resorted to self-help.

“We wonder why Oshiomhole accepted the result of the primary election in Lagos state whose result was also not announced by the electoral panel. Why will the same scenario be acceptable in Lagos state but regarded as self-help in Ogun state? Is it because it was executed by the Capo Di Tutti in Lagos state?”

Amosun said despite the deadline given by INEC for the submission of names of candidates for the house of assembly, Oshiomhole was yet to submit the names to the electoral body.

“If Oshiomhole is denying the outcome of the gubernatorial primaries because the State Electoral Committee shied away from announcing the result, what is the reason for denying all the 26 candidates for the House of Assembly freely elected by members of the APC in Ogun State?

“As regards the claim of Oshiomhole that Sen Amosun withdrew the security of the panel, Indabawa, Chairman of the panel, is a retired Commissioner of Police.

“He came into Ogun State with a full complement of police team which he claimed was provided for him by a Deputy Inspector General of Police. How could Amosun have withdrawn policemen he did not assign or over whom he had no control?

“All of these have clearly shown that the motive of Oshiomhole is not the rule of law which he proclaims on the rooftop. It is rather, an evil plan with some collaborators, desperate to hijack the government of Ogun state and add it to the harem of states under their rapacious gang of exploiters.

“As we have stated before, this evil design will not succeed in Ogun State. Our people are too educated, exposed and sophisticated to come under such odious arrangement.

“On a general note, Oshiomhole, who became the APC chairman barely three months ago, is already threatening to write the epitaph of the party in his 100 days of ignominy.

“By the Grace of God and the support of the good people of Ogun State, Hon. Adekunle Abdulkadir Akinlade will be sworn in as the new governor of Ogun State on May 29, 2019.”