I am one of the founders of APC, nobody can push me out of it: Okorocha 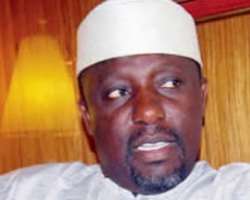 Imo State Goovernor Owelle Rochas Okorocha has dismissed rumours that he plans to defect from the All Progressives Congress(APC) over the fallout of the party's governorship primaries in the state.

Gov. Okorocha’s plan to ramrod his son-in-law Uche Nwosu through as APC governorship candidate in the state has been crashed as the party affirmed Hope Uzodunma as its flag-bearer in the state.

“How can I build a house and leave it for someone else? I am in APC; I founded APC; I gave the name APC and so this is our party and we continue with the party and build the party for victory,” the governor said in response to the trending rumours that he would quit the party.

Okorocha spoke with State House correspondents after a closed door meeting with President Muhammadu Buhari on Thursday at the Presidential Villa, Abuja.

He said he was in the Presidential Villa to clear the air that presidency was behind what Adams Oshiomhole, APC National Chairman, was doing in some of the states.

Okorocha said that Oshiomhole's actions had affected APC negatively, adding that there was no instruction from the president directing him to do anything illegal or create any sort of injustice.

“Oshiomhole is on his own in this whole thing; there is no presidency support for him to refuse those who won elections and give wrong candidates who did not win election.

“So, this is the matter and I will simply say it is not on the consent of the presidency; he is on his own.

“I also requested that Oshiomhole must learn to respect the rule of law and obey court orders where they apply; this issue of court orders as tissue papers must stop; it does not reflect the image of our party.

“He must act quickly to fix the integrity of this party because his coming ought to have brought in joy into the party not sadness.'' he said.

The governor said that APC would not disintegrate for as long Buhari was still the President of the Federal Republic of Nigeria and leader of the party.

Okorocha said that the party was still intact though many people were hurt.

He said that since Oshiomhole came on board coupled with the controversy surrounding his primaries, APC was losing almost five million voters because of anger and protests.

The governor said it was high time national chairman was called to order; to respect the rule of law; do the right and respect court orders.

“He did not; he never won the election and Oshiomhole cannot impose candidates unacceptable to people on the people.

“He should do the right thing before he creates more disaffection for our party; I do not think the National Working Committee (NWC) will not submit the name of Hope Uzodinma.

“In the first place, NWC sent a 13-man delegation who conducted election and 12 of them signed proving that Uche Nwosu won the election with 265,000 votes as against Hope who had less than 7,000 votes.

“Nobody can do that; and if they do that, that must be worst imposition in history,'' he said

Speaking on the comment of the National Leader of APC, Bola Tinubu, that Oshiomhole was on the right track, Okorocha said that Tinubu must have been `ill-informed'.

According to the governor, if Tinubu is properly informed, he will not say that Oshiomhole is doing is right thing.