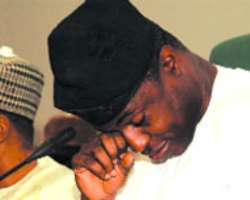 Bankole
The 'Progressive' members of the House of Representatives who pledged to release damming documents on Speaker, Dimeji Bankole, if he failed to resign from office after a seven-day ultimatum kept to their promise yesterday, as they produced contract papers on three items procured for members and one item for the Speaker and his deputy.

The documents, which filled a multi-coloured 'Ghana Must Go' bag was handed over to the House Press Corps for distribution to members at the lobby of the new wing of the House following the padlocking of the Press Centre.

Mr Dino Melaye and his group had issued the ultimatum last week, while the Speaker dismissed the documents in the custody of the group as fake. He said the documents were already being investigated by anti-graft agencies.

Addressing the Press earlier, Melaye in a prepared text accused Bankole of running a secret House budget, where members were kept in the dark on how the budget of the House was implemented.

According to him, the budget has been a tightly guided secret from members, despite repeated agitations to open the books for consumption.

'The result is that the Hon. Speaker has consistently mismanaged House funds to the exclusion of the majority of the House members. Neither the Appropriation Committee nor the House Services Committee can summon the courage to allow the details of such House budgets to be made available to Honourable members for their open consideration and input without the consent of the Hon. Speaker,' he alleged.

The group demanded explanation on the disbursement of N9billion out of the N11billion capital vote for 2008 and 2009.

Using three items purchased during the period under review, the group claimed N225.6million must have been lost to over-inflated costs of the items and a breach of the Public Procurement Act 2007.

For the purchase of the cars at N335.5million, the group said that it was outrageous when compared to N23million that the former Speaker, Mrs Olubunmi Etteh intended to spend to buy cars, which was part of the allegations of profligacy levied against her.

Few minutes after the release of the documents, spokesman of the House, Mr Eseme Eyiboh fired back, saying that the leadership of the House was aware of the plan of a group he described as legislative delinquents, who were determined to cause confusion when the House resumes next week from recess. 'Now the House as a whole is aware of the plan of some legislative delinquents, who are trying to attract public attention to their legislative insensitivity to the issue at the public domain.

'One currency in this country now is how to move it forward and make it possible for the average Nigerian to benefit from the dividends of democracy. That is what everybody should by concerned about.

'At this time when we are getting very close to election period, every constituent, for that matter should now be able to wake up and cross all the 't's' and dot the 'I's' to be able to create that nexus that will join him and his people at this time and not the issue of coming to public domain and carrying documents.

'I am not going to join issues on any documents because the documents I have seen here are mere tissues and scripts, which of course, can only be done by people who are looking for schedule of responsibility if they don't have one. That is my impression and I stand to be corrected,' Eyiboh said.

Eyiboh stated further that neither the Speaker nor any member of the House leadership was under any responsibility to award contracts.

As the spokesman of the House, he advised anybody who has any document to avail himself or herself the advantage of the oversight responsibility that the Constitution has placed on members, or bring it to floor when the House resumes plenary.

'These avenue and other prerogatives are all opened and unimpeded to them instead of carrying documents all over the place. Taking advantage of the fact that there are free stationery stores where you can simply photocopy and speculate documents like that. We are here for a more serious business than that; that is why I use the issue of legislative delinquent. There are so many things you have to look at gentlemen,' he noted.

A lawmaker, Mr Ishaq Abiodun Akinlade [PDP] Ogun State, who reacted to the release of the documents on the Speaker, urged his colleagues to sheath their sword and allow issues to be resolved at the plenary and not on the pages of newspapers.

According to him, there was the need to protect the institution of the parliament, which he noted had made provisions for internal mechanism for aggrieved members to vent their anger.

'The progressives should exploit all allowances within the system for a peaceful resolution of any issues, going to the Press is not the best way to seek redress, we have our internal ways of dealing with issues and I believed that when we resume, all matters will be resolved amicably,' he said.

A source at the House also dismissed the allegations, saying it was a hidden agenda to destabilise the House and curtail its legislative activism of recent times. 'With the almost collapse of the N2.3billion, 407 car purchase allegation by Barrister Festus Keyamo following the PAN letter to EFCC and Keyamo failed melodramatic testimony at the Ethics and Privileges Committee, this new allegation is yet another plot to destabilize the House.'

The source said Bankole deserves accolade not knocks as the purchases were not only legitimate, but prudent.

'Let it be stated that the leadership of the House are at times conscious of the need for financial discipline.

Take the case of Mercedes Benz S.600 car (bullet proof) that is (Treated) cost N52.8 million because it was ordered directly from the manufacturer. The prevailing price of the same model in Nigeria from quotations submitted is between N82 million and N105 million so the House should rather be applauded for its prudency in saving over N25-N50 million on the transactions.

The same goes for other purchase that was transparently done.

It is worthy of note that Coscharis quoted N85million for the convoy jeep. But the Hon. Speaker opted for 406 Peugeot car to cut cost. By that alone, the Speaker saved the country 40 percent less cost. Indeed, these purchases were in the 2008 Budget which you know is a law. The cost of the car purchased which are yet to be supplied were all purchased at prices below what is contained in 2008 Budget,' the source said.