Labour To Commence Nationwide strike On Tuesday as It insists on N30,000 minimum wage 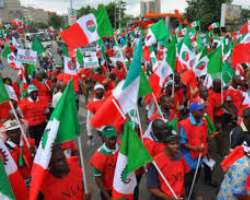 The nationwide strike over the national minimum wage begins on Tuesday as the recent decision by the Nigeria Governors’ Forum (NGF) to pay N22,500 against the N30,000 final agreement by the National Minimum Wage Tripartite Committee, has deepened the crisis and angered the Labour movement.

The N30,000, according to Labour was as a result of long negotiation, dialogue and a compromise, involving all the stakeholders, including the governors six representatives.

Since the governors have therefore reneged on the agreement; repudiating its earlier documented offer; Labour has now jacked up its demand to N65,000.

Labour said as they move into the nation-wide strike on Tuesday, N65, 000, would be the focus of their demand.

“Since the Government which is a major stakeholder in the Tripartite Committee has reneged on the agreement repudiating its earlier documented offer, ULC in conjunction with other Labour Centres rejects the N30,000 compromise figure of the Tripartite Committee and now insists on our original collective demand of N65,000 as an irreducible minimum. The only figure that we now recognise is N65,000 or nothing else.

“This shall be the focus of our demand as we move into the nation-wide strike come Tuesday, the 6th day of November 2018.” The ULC said in a statement signed by its President, Comrade Joe Ajaero.

Addressing an emergency press conference at the Labour House, Abuja, yesterday, the President of NLC, Comrade Ayuba Wabba said the NGF as a body is not a negotiating member of the committee but a mere political organisation, and therefore has no right to negotiate the figure for the new minimum wage.

Comrade Wabba pointed out that the N30,000 figure was not the initial demand by labour but a compromise figure arrived at the end of negotiations by the tripartite partners.

He said: “Our attention has been drawn to a communique issued by the Nigeria Governors Forum (NGF) after its meeting on 30th October 2018 claiming that State Governors can only pay N22,500 as the New National Minimum Wage.

“First, we wish to state that the Nigeria Governors Forum is not a negotiating body but merely a political organization for the convenience of state governors. The tripartite committee from inception sent letters to each state government to send in their memoranda as their contributions to the new national minimum wage negotiating process. 21 States sent in their memorandum quoting figures.

“Second, the demand for organised labour is not N30,000. Our demand is N66,500. The N30,000 figure is the compromise figure arrived at the end of negotiations by the tripartite partners – Government, Employers and the Organized Labour. The new minimum wage was a product of intense negotiations that lasted for almost one year.

“The Governors had six representatives on the Tripartite Committee – one state governor represented each of the geopolitical zones. The representatives of the state governors were part and parcel of the work of the negotiating committee from beginning to the end. It is important to note that the National Minimum Wage is not an allocation to workers. It is a product of negotiation by the tripartite partners. The unilateral pronouncement by governors of N22,500 Minimum Wage is an abuse of every known principle of industrial relations, labour laws, processes and international best practices.”

Wabba added: “We are also very concerned about the huge pressure being brought upon the Organised Private Sector (OPS) to compromise their stand on the N30,000 compromised new national minimum wage. This pressure by the enemies of the Nigerian people was what led to the recent statement by NACCIMA that sought to cast aspersion on an already negotiated new national minimum wage.

“We believe that the Nigeria Employers Consultative Association (NECA), a reputable body that represents Organized Private Sector (OPS), will present the fact as it is.

“We, therefore, condemn unequivocally the communique issued by the Nigeria Governors Forum on October 30, 2018, as an attempt to undermine the authority of Mr President. This position should be equally condemned by all.

On the nationwide strike, the NLC President said: “We call on our members to continue to mobilize in preparation for the commencement of an indefinite strike on the 6th of November, 2018, if by then necessary steps have not been taken to adopt the recommendations of the Tripartite Committee.”

Also describing the NGF as an amorphous body, the President of ULC, Comrade Joe Ajaero said: “The offer to pay Nigerian workers the paltry sum of N22,500 as a new national minimum wage by the amorphous body, the Governors’ Forum is not just contemptuous but negates the principles and spirit of Social Dialogue as envisioned by ILO conventions.

“It is therefore unacceptable and disdainful of the vast majority that makes up the nation’s workforce and indeed the masses that create the nation’s wealth. It immediately makes the N30,000 compromise figure an orphan.

“ULC having sadly realised that Government is fully committed to frustrating and sabotaging the desire of Nigerian workers for a decent wage via a new minimum wage; seeing the deployment of the subterfuge called the Governors’ Forum to disrupt and hijack the due processes known to the nation’s Industrial Relations space in reaching a new minimum wage for workers despite the fact that the Governors were fully represented in the Tripartite Committee by six governors have become more justified, determined and committed to our joint efforts with other Labour Centres to defend Nigerian workers from the exploitative tendencies of this government.

“Going outside the known framework to seek the resolution of the contrived Minimum Wage impasse is devious. It undermines Tripartism and the various traditions that govern responsible and equitable engagement of the Social partners – Workers, Employers and Government. A sensitive Government is not expected to reject tested and proven frameworks and processes for civil engagement but this is what this Government has chosen to do.”

Comrade Ajaero added: “All Nigerian workers should remain alert! Gird your loins and be ready as we go into the Joint Central Working Committee (CWC) and the final days of preparation to grapple with the looming oppression.”