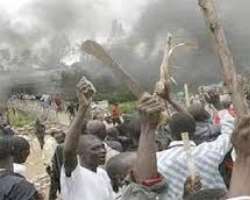 No fewer than 11 persons have been murdered and several houses burnt in a repeated crisis between the people of Ogbe-Ijoh and Aladja communities, in Udu and Warri South-West local government areas, Delta State.

Addressing journalists on the development, the National Coordinator, Centre Peace and Environmental Justice (CEPEJ), Comrade Sheriff Mulade, called on the state governor Ifeanyi Okowa, to as a matter of urgency relocate to the war zone in order to settle the crisis rocking the two communities over donkey years.

Mulade, said the recent attacks by the warring communities claimed 11 lives while several houses were burnt down, bemoaning the foot dragging attitude of the state government in ensuring that peace was permanently restored to the troubled area.

He urged the state government to step in and bring peace, law and order in the communities so as to foster peace and increase in economic growth and revenue in Delta state.

The Warri based activist implored the Delta state government to “stop inviting Aladja and Ogbe-Ijoh, stop setting up committees as well as inviting both warring parties to Asaba and to other security meetings which has not yielded any fruitful peace to the crisis ridden communities since the coming of the present administration.”

He expressed disappointment over the way and manner the government is handling the issue, and said: “will Governor Okowa wait till a prominent Deltan or highly placed politicians lost his or her life before the government will intervene to end the crisis? Is it because the deaths are not his relations? Must the people produce a governor to resolve their disputes?

“The greatest assets of any society are its citizens and we recently lost over 11 lives and our dynamic Governor Ifeanyi Okowa could not make an emergency trip to sympathize with victims and people of both communities but was in neighbouring city of Warri recently to celebrate event centre opening while citizens are dying. The state government can broker peace among the warring communities and this will definitely boost the re-election of the governor in 2019.

“He will use the medium to warn both communities of Aladja and Ogbe-Ijoh to stop the ugly act or face the wrath of the State, saying that; “So many lives have been lost and too many blood bath flow for too long. We should stop killing ourselves.”

It would be recalled that in a renewed conflict in 2017, a mobile policeman and several others sustained various degrees of injuries when the communities clashed over the ownership of the disputed land.

The governor had warned strictly that in the interim, both communities should steer clear of the disputed land as security agencies would remain in the disputed area pending when all issues are resolved as a way of preventing further break down of law and order.

Hear him, “Government will not shy away from taking decisions that may not be palatable if the need arise,” the governor said, emphasizing, “it is our duty to preach peace, we must be careful about the type of communities we leave for our children because, any father or mother who wants to leave a crisis-ridden community is not worthy to be one.” the governor stated.

“I have always said that in any dispute, there must be give and take for the best resolution to be achieved and I want to thank you (members of the committee) for the reports as presented, we will study them and take right decisions for a lasting solution to be proffered on the crisis”.