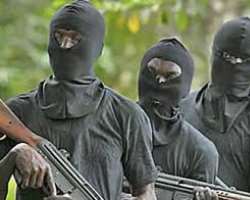 As the Christmas season draws closer, men of the underworld have strategized a new method of taking on traders and suspected members of the public of their monies and their valuables.

Trouble started Monday at about 6:35am when suspected robbers heavily armed disguised as a driver and motor-boy taking Asaba/Onitsha route with Delta State colour (blue and white) picked some women travelling to the Onitsha market from Airport View, Okpanam and took them to Mariam Babagida way close to the State Police Command before dispossessing them of the monies and valuables.

An eyewitness, Mr Peter who narrated the sad event said, “My own neighbor is involved. Her N60, 000 which she was taking to the market was taken from her and her phone was also carted away”.

According to Peter, the disguised armed robbers numbering about five were carrying a fully loaded bus, robbed all their victims before dropping them close to the police command and zoomed off.

At press time, the Police Public Relations Officer (PPRO), DSP Andrew Aniamaka, told reporters on phone that he is unaware of the incidence.