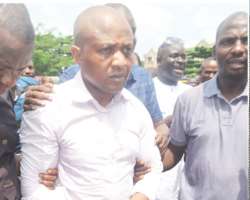 Alleged kidnap kingpin, Chukwudumeme Onwuamadike, a.k.a. Evans, whose victims had given accounts of torture while in his dungeon, on Friday narrated how he was allegedly tortured by the I-G’s Intelligence Response Team and the then Special Anti-Robbery Squad (SARS).

He also gave a chilling account of how he witnessed the extra-judicial killings of at least 30 detainees by the police team.

Evans said at the continuation of a trial-within-trial at an Ikeja High Court where he is facing trial alongside six others on a two-count charge of conspiracy and kidnapping.

Before Evans’ testimony, a five-minute, 33-second video recording was played in the courtroom.

The video recording showed Inspector Idowu Haruna, a member of the IG’s Intelligence Response Team, sitting beside Evans cautioning him and taking his statement.

Mr Olanrewaju Ajanaku, Evans’ lawyer, however, disputed the validity of the recording by claiming it was heavily edited.

Evans, while being led in evidence by Ajanaku, described himself as a businessman dealing in haulage and ornaments, resident at No. 3, Fred Soyebode St., Magodo, Lagos.

In a graphic detail, Evans described how he was tortured by police officers after his arrest.

“Insp. Haruna (member of IG’s Intelligence Response Team) took me to Abuja and brought me back to Lagos, where I was at the I-G’s Guest House at Obalende, Lagos.

“Sunny, the 2 I/C (second in command) to Abba Kyari, Head of the IRT, Mr Christian Ugu, Mr Phillip and other police officers working with them were there.

“Haruna brought about 25 sheets of paper and asked me to sign; that day, my mind told me not to sign because it might be my death warrant.

“Phillip put his hand in his pocket and brought out a brown hospital card; showed it to me and told me to sign it, saying that do you think that we are joking here; he said if anything happens to me here, this card covers everything.

“Phillip said the police will not be held responsible, and before I knew, Ugu slapped me and that was how they started beating me;” Evans told the court.

The alleged kidnap kingpin gave more details to the court how the police officers tortured him and made him witness executions in a bid to get him to admit to his crimes.

“They took me to the backyard of the I-G’s guest house; I sustained injuries on my head and body, and Phillip asked the policemen to work on me and when I started bleeding, he said you think we are joking here.

“At the backyard, I saw some people that I was paraded with; they were wearing leg chains. Some of them had bullet wounds on their legs and Phillip ordered Haruna to bring a big brown cellotape, handkerchief and poly bags.

“Haruna forced a handkerchief into the mouth of one of them; he used the cellotape to tightly tape his mouth and face and put a poly bag over his head and cellotaped it, and used another poly bag and cellotaped it for the second time, and they left the man on the ground.

“Haruna went to the man and stepped on his body and he was unresponsive and he told me can you see I have travelled him.”

Evans told the court that four more persons were executed in the same manner by the police officers in his presence.

“I was brought before them, and I started begging, asking them what do they want me to do, and they told me to cooperate with them, and I said okay that I will do anything they wanted me to do.

“Phillip asked them to take me to the house, and he asked if I knew the method of killing and I said no; they said that it is called ‘Saddam Hussein’.

“He said that there is no way an autopsy can predict the cause of death of the five people they had just killed, and that those people have travelled.”

Evans said after witnessing the execution, the 25 sheets of paper were brought for him to sign by the police.

He noted he was trembling with fear and Sunny, the second in command to Abba Kyari, the Head of the IGP IRT asked Haruna to offer him a can of cold Fanta.

“When the Fanta was given to me, I drank it and after a few minutes, they brought the 25 sheets of paper for me and I signed them.

“Some things were written on some of the sheets of paper while some were blank; that was how I was forced to sign the confessional statements,” Evans said.

On cross-examination by Ms Titilayo Shitta-Bey, the Lagos State Director of Public Prosecution (DPP), Evans confirmed his name and the names of his parents, and denied knowing the officers before his arrest.

Stephen Onwuamadike.
“I did not know Insp. Haruna, Abba Kyari, before my arrest; I’m the one in the video, I was cautioned in the video, but after the cautionary words, I was forced to sign.

“The story I told the court was never an afterthought, SARS killed more than 30 people in my presence; the killings took place at the I-G’s guest house in Ikoyi.

“When I was taken to the station, there was a field; I was in a car while I was waiting for Abba Kyari to come.

“Abba Kyari, when he came, told me to beg for forgiveness in my interview with journalists, and also to inform the world I had cancer which I don’t have. The police killed one Felix Chinemeri in my presence,” he said.

While being re-examined by Ajanaku, his lawyer, Evans said that he had not spoken to journalists before he made his alleged confessional statement to the police.

Earlier, during proceedings, Insp. Haruna was cross-examined by Ajanaku; he told the court it took more than an hour to obtain Evans’ statement.

Haruna denied that Evans changed his clothes because of blood stains from torture, before the video of Evans giving his confessional statement was made.

He denied editing the five-minute and 33-second video of Evans giving his statement to the police.

“I never threatened to kill the first defendant (Evans), and I never created fear in him by killing people in his

and Victor Aduba.
The six were arraigned on Aug. 30, 2017 on two counts of conspiracy and kidnapping of the Chief Executive Officer of Maydon Pharmaceutical Limited, Donatus Dunu, from whose family they allegedly collected 223,000 Euros (N100 million) as ransom.

Evans and his co-defendants had pleaded not guilty to all the charges.

Justice Hakeem Oshodi adjourned the case until Nov. 23 for continuation of defence in the trial-within-trial.