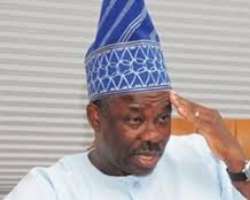 To this end, the party has given the governor three senatorial slots and the right to bring in one member for the House of Representatives.

Subsequently, the governor's name and two others have been submitted to the Independent National Electoral Commisison as the party's senatorial candidates in the 2019 election.

Saturday PUNCH investigation further revealed that the name of the former deputy governor of the state, Mr. Segun Adesegun, earlier submitted to INEC had been substituted with that of Senator Lekan Mustapha.

It was further learnt that the party had promised to give the ex-deputy governor a ministerial appointment once the party gets to power in 2019.

The state chapter of the party had been enmeshed in internal crisis following the governorship primary that produced Mr. Dapo Abiodun as the candidate of the party, against the preferred choice of the governor, Adekunle Akinlade, who had been chosen as the party's consensus candidate before the primary.

But, after the primary, conducted by the electoral committee from the National Working Committee, in which his candidate lost, the governor had protested against the outcome of the election as he lashed out at the National Leader of the party, Asiwaju Bola Tinubu, and a former governor of the state, Chief Segun Osoba, for maintaining “deafening silence” on the matter.

The governor had also visited President Muhammadu Buhari and Vice President Yemi Osinbajo about four times in three weeks over the crisis.

He had also dismissed rumours that he was planning to leave the party, while insisting that he would hand over to Akinlade as against the winner of the primary.

But in a bid to end the crisis, the party gave the governor the senatorial slots and the Rep position.

Already, the names on the provisional list of the National Assembly candidates for Ogun State released by the Independent National Electoral Commission on Thursday showed that Amosun got the ticket for the Ogun Central seat, thus displacing the incumbent, Dr. Lanre Tejuoso, who had expressed his intention to go for a second term. And for the two other senatorial seats in Ogun East and Ogun West, the names of Senator Lekan Mustapha and Chief Tolu Odebiyi were on the list respectively.

The name of a former deputy governor in the state, Prince Segun Adesegun, who was equally in the race for the ticket of the Ogun East Senatorial District, was conspicuously missing on the list. He, however, said he had decided to let go and move on.

Meanwhile, former President Olusegun Obasanjo was said to have visited Amosun on Friday morning in his office at Oke Mosan, Abeokuta.

Sources told our correspondent that the former President arrived the office some few minutes before 10am.

You lied, Amosun replies Oshiomhole
Ogun State Governor, Ibikunle Amosun, has accused the National Chairman of the All Progressives Congress, of not being truthful with what really transpired during the party's 2019 governorship primaries recently held in the state.

The governor, in a statement signed by his Senior Special Assistant on Media, Opeyemi Soyombo, also lambasted the Acting Publicity Secretary of the APC, Mr. Lanre Issa Onilu, accusing him of deliberately peddling falsehood to deceive members of the public.

He said, “The imbroglio over the primaries of Ogun State has brought to the fore the danger the APC faces in the hands of Comrade Adams Oshiomhole and few members of the NWC like Onilu, who are in cahoots with him.

“Oshiomhole removed four of the nine winners of the primaries and replaced them with acolytes of Chief Olusegun Osoba and Dapo Abiodun. This level of arbitrariness hardly has precedence in the annals of party politics in Nigeria.

“Let us also state that the unguarded statements of Onilu on the controversy trailing the last primaries of the party in Ogun State, represent nothing but a pack of lies aimed at – but not limited to – confusing members of the public regarding the grand fraud that is being presented as fact.

“It is important to note that he was not yet the Publicity Secretary when the primaries took place, it is therefore assumed that his account of the primaries was drawn from the briefing he received from the same personalities who perpetrated the fraud they seek to foist on the good people of Ogun State.

“For the avoidance of doubt, we state for the umpteenth time that there was no gubernatorial primaries in Ogun State other than the one held on October 2 that produced Hon. Adekunle Akinlade as governorship candidate.

“The claim by Mr. Onilu of a phoney court injunction restraining the Ogun State APC executive committee from participating in the conduct of the primaries is a fabrication to defraud the people of the state.

“Members of the APC in Ogun State charge leaders of the party to call Comrade Oshiomhole to order before he puts the chances of the party in the 2019 elections in jeopardy.”