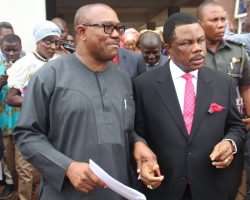 The Governor of Anambra State, Chief Willie Obiano, has explained why the State Government did not congratulate his predecessor, Mr Peter Obi, on his nomination as the vice presidential candidate of the Peoples Democratic Party (PDP) for the 2019 polls.

News Express reports that the emergence of Obi as the running mate of the PDP presidential flag bearer, Atiku Abubakar led to wide jubilation in the state.

But while Igbos celebrated the emergence of an Igbo man as VP candidate, after so many years of being at the back bench, the state government remained mute.

Speaking with journalists in Awka on Friday, through his Special Adviser on Political Matters, Ifeatu Obi-Okoye, Obiano dismissed the celebration as unnecessary at this stage of the game.

He said: “Let's get something clear; I don't think Peter's nomination as VP candidate calls for any congratulatory message. If he becomes the vice president, we will congratulate him.

“We (APGA) are running for the presidential election against PDP and we fielded a candidate who we believe can win the PDP candidate, so we have no reason to celebrate Obi. Otherwise, we are saying we have already acknowledged that they will defeat us.

“But I want to say as you have mentioned that, as someone who is from here, and who was in APGA, if by any chance, Obi becomes the VP, we will congratulate him. For now, we are in the trench, planning how we can win the election for APGA.”

“There would be surprises in the 2019 polls. Nobody should rule out the chances APGA in the race.”

Obiano reeled out factors that will play out in 2019 to include, security factor, ethnic factor, the lack of governance, the inability of politicians to keep faith with the people.

He added: “What we should all watch out for is that the election is not rigged.”

Obi handed over the mantle of leadership to governor Obiano on March 17, 2014, on his former political platform, APGA, which he left six months after for the PDP.