Re: Security Beef Up At National Assembly 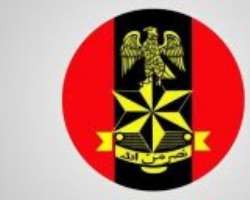 A statement issued by Brigadier General Texas Chukwu , the Director Army Public Relations yesterday said that the Nigerian Army wishes to state categorically that troops of Guards Brigade are routinely deployed within Abuja and its environs on receipt of any intelligence report of mischievous elements that may want to cause mayhem. Therefore, as part of the routine responsibilities of the Brigade, troops were deployed at the Three Arms Zone of the Federal Capital Territory based on intelligence report of a planned invasion by members of the Islamic Movement of Nigeria (aka Shiite). Hence, troops were deployed to forestall any breach of peace and security.

The Nigerian Army stated that media platforms should verify their stories before publication to avoid misleading the general public.

The Nigerian Army is a professional and responsible organisation that conducts its operations in line with the international best practices.

The public was advised to disregard the information and go about their legitimate businesses.