Tit-bit on oversight function of HoR Committee on Water Resources 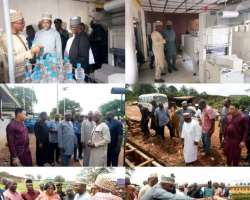 The House of Representatives committee on water resources were in Benin, Edo State, from Sunday the 19th day of October. On arrival, the committe first touch was the headquarters of Benin-Ovena River Basin Development Authority, where they were briefed by the MD of Benin-Ovena River Basin Development Authority, Engr. Saliu O. Ahmed on the projects the authority in Benin has been able to execute based on budgetary provisions.

At about 6:00 pm in the evening, the committee made a tour of the Shangai Integrated Farm which is an anchor farming program in conjugation with Shangai company, aimed at training young farmers on how to be a successful farmer. While on the tour, the MD of Benin-Ovena River Basin Development Authority disclosed to the Honourable members that the Shangai farm project sits on about 300 hectares of land with different crop plantation and aqua fishing with a piggery by the side. The Honourable members showed satisfaction after asking series of questions which were adequately answered by the MD and his team.

*Monday 22nd*
The house committee on water resources set out as early as 8:00 am for the business of the day and their first visit was to the Benin-Ovena River Basin Pure Water Factory located in the premises of the first headquarters used by the River Basin Authority upon establishment in Benin. The water factory is said to produces about 2000 bottles of water daily.

The house committee were also pleased with the facility after posing series of questions to the team handling the facility which were answered satisfactorily.

*Monday 22nd October*
Time 12:23
The house committee on water resources on oversight in Benin visited Ukpoke Irrigation Farm, where the house members decried the terrible condition of the road leading to the facility which in their assessment is a big disadvantage to the establishment stating that irrespective of the economic benefit of the the irrigation farm, moving farm produce out will be unrealistic, thereby concluding that there's no value for money on the Ukpoke Irrigation Farm.

*Monday 22nd October*
Time 2:30
Still on the oversight function in Benin, the house committee on water resources moved to Federal Government Girls College, to inspect a water works project which is to serve an entire community of 2000 people. On getting there the committee chairman, Hon Aliyu Bahago Ahman Pategi registered his displeasure at the level of work done on the implementation of the budget as allocated to the River Basin Development Authority, thereby blaming the Minister for Water Resources, Sulaiman Adamu for intentionally subverting projects nominated by members of the House of Representatives for the betterment of the members of the benefiting community, Honourable Bahago stated further that Rep members are the closest to the people at the grassroot and that's why members understands the problems at the local level first hand.

Concluding, Hon Aliyu Bahago Ahman Pategi said he will be taking up the issue on why projects meant to solve the problem of water for a community will be intentionally left out by a ministry under the instruction of the minister in charge.

*Monday 22nd October*
Time 5:30
The house committee on water resources left Benin and moved to Abeokuta for the continuation of oversight function, to inspect the budget implementation carried out at the Ogun-Oshun River Basin Development Authority as provided by the laws of the land.

The House committee on water resources on oversight function left Ogun-Oshun River Basin Development Authority to move to Lower Niger River Basin Development Authority, where the committee is expected to carry out further oversight function to ascertain that every money appropriated for the river basin authority in the budget by the national assembly and as being expended by the executive indeed are being used as stipulated by the rules and laws of the land.