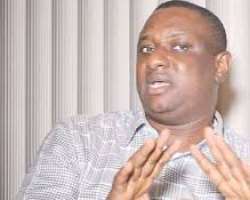 The Spokesperson for the President Muhammadu Buhari Campaign Organisation, Mr Festus Keyamo (SAN), has denied collecting money from the NNPC to run the publicity department of the organisation.

Keyamo, who is also the campaign organisation’s Director of Strategic Communications, said on Thursday in Lagos that the organisation would not depend on public purse to run its activities.

In a statement copied to the News Agency of Nigeria, Keyamo said: “Our attention has been drawn to fake news to the effect that I have received a large sum of money from the NNPC and submitted another budget to the same corporation to run the media and publicity department of the campaign.

“The story is a classic example of the many rots in the system that President Muhammadu Buhari is determined to address.

“Experience has taught that sharing of money does not win elections.

“We do not intend to go that route. We shall continue to showcase the achievements of President Muhammadu Buhari to convince Nigerians that he deserves a second term in office,” the spokesman said.

The senior advocate of Nigeria said that his participation in the campaign was part of his larger crusade for enthronement of an accountable government and true democracy.

“To me, this is not just a campaign but a crusade; hence, I came out of my shell to make a full-blown participation in the process.

“I am determined to make my little contribution to prevent those who looted our treasury in the past to establish `big businesses’ from staging a comeback to power.

“In the process, my hard-earned integrity will be guarded jealously.

“I have not, and will not go near the public purse; the campaign organisation will not do so either. This is a pledge before the Nigerian people by which we shall stand,” he said.