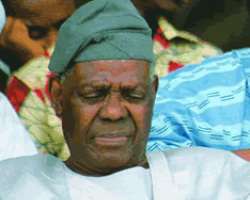 AC National ChairmanAkande
Arrangements have been concluded to change the name of the Action Congress (AC), Daily Sun reliably gathered over the weekend. The three names being considered are Action Congress Party(ACP), Action Party of Nigeria(APN) and Action Congress Democratic Party(ACDP).

The need for the change arose out of the compelling desire of leaders of the party to re-position for the 2011 elections, which has triggered off mergers and alliance talks with some political parties in the last three months.

The party is in power in controls of Lagos and Edo States and is easily touted as the current leading opposition party in the country.

The AC sprang from the ashes of Advanced Congress of Democrats (ACD) in 2005, which in itself emerged from the dying embers of the Alliance for Democracy(AD) in 2004.

Former President Olusegun Obasanjo had in his determined bid to gain a foothold on his South West unleashed series of onslaughts on the AD in 2001, which controlled the entire zone. These assaults led to a protracted factionalisation in the party and a steamy trade-off with the AD governors which routed them from office.

The ex-president had then not reckoned with the ACD which metamorphosed from a faction of the AD led by the then Lagos State governor, Asiwaju Bola Tinubu.

The ACD soon got energized and transformed into the AC, which was envisioned to have a pan-Nigeria outlook, coalescing with estranged leaders of the ruling Peoples Democratic Party(PDP) including Obasanjo's Deputy, Atiku Abubakar, the late Abubakar Rimi, former Speaker of the House of Representatives, Alhaji Ghali Umar Na'Abba and former Deputy Senate President in the Second Republic, Dr. John Wash Pam.

The AC's poor performance in the 2007 polls as well as alleged stranglehold on it by Tinubu, however, engendered waning enthusiasm which has occasioned perceived indifference and return to the PDP by some of these leaders in the past three years. The AC was part of the mega party talks last year with General Muhammadu Buhari, then of the ANPP, and Attahiru Bafarawa of the Democratic Peoples Party(DPP).

The merger talks did not materialise and Buhari who has a preference for alliance has since moved on to the Congress for Progressive Change (CPC).

There are strong indications that merger talks with the DPP has pulled through. The DPP which currently controls no state is very strong in Sokoto and Zamfara states, where it ran a neck-to-neck gubernatorial battle with the PDP and ANPP candidates in the 2007 polls.

A leader of the DPP in Kebbi State, who pleaded anonymity, confirmed the development but added that it was the responsibility of the national secretariat of the party to make the formal announcement and not the state chapters.

Also, confirming it, a governorship aspirant on the platform of the AC in Nasarawa State, Prof. Onje-Gye-Wado, said the merger was designed to galvanise the democratic forces of the country towards victory in a free, fair and transparent 2011 elections.