Ekiti has not received any money from FG 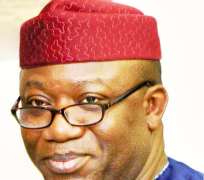 The attention of Ekiti State Government has been drawn to some malicious reports from some quarters that the new administration has received N30 billion from the Federal Government in the last one week.

We would have ignored this baseless rumour that is being circulated on social media by some unscrupulous individuals, but for the sake of members of the public that could be misled in the process.

The fact remains that the new administration has not received any money from the Federal Government or any of its agencies since its inauguration a week ago.

As a responsible government that believes in accountability and transparency, this government will always provide correct information to the people on all its transactions and will not hide anything from the people.

Members of the public are thereby assured of regular briefings on the state of finances and developments in the state.

The era of government by deceit and falsehood has ended on October 15, 2018.

The present administration is focused on meeting its obligations to workers, pensioners and the general public and will not be distracted by lies being told by remnants of the crumbled Ayo Fayose dynasty.