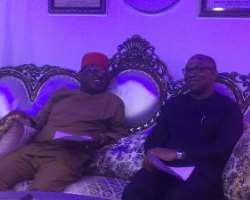 Vice Presidential Candidate of the Peoples Democratic Party (PDP) for the 2019 elections, Mr. Peter Obi, on Monday evening met with Governor Dave Umahi of Ebonyi State as part of his on-going consultation of Igbo leaders.

Obi, the immediate past Governor of Anambra State, has, since he was chosen as running mate by PDP Presidential Candidate, Alhaji Atiku Abubakar, been consulting Igbo leaders as part of efforts to get the geo-political zone to go into next year's general elections as a united bloc.

The meeting took place at the Ebonyi State Governor's Lodge in Abakiliki, the state capital.

It would be recalled that Engr. Umahi, in his capacity as Chairman of South East Governors' Forum, had publicly expressed displeasure that Atiku did not consult them before choosing his running mate.

He, however, explained that they have no problem with Obi, whom he described as his close friend. – News Express