Retrospect: Akpabio's False Alarm, A Gimmick Of A Con Artist. 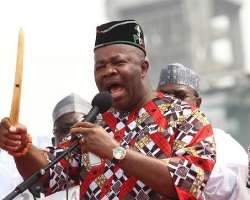 The senator representing Ikot Ekpene Senatorial District, Chief Godswill Akpabio about a month ago raised an alarm of an alleged attempt on his life.

The story to this effect was coming from different sources of the media and press releases from some highly-placed members of the All Progressive Congress Party (APC) in Akwa Ibom State and painted a grim claim of three men on a bike riding passed and shooting guns in the air along the senator's house in his country home, Ukana - Essien Udim while he was said to be having a meeting with some chieftains of his new found fortress of political criminals.

There were no footage or still pictures coming out to buttress this salacious claim despite the surveillance cameras mounted on his house and the use of smart phones now handy even to the toddlers.

The police authority has discredited Akpabio's claims as false information as the Commissioner of Police, Mr Adeyemi Ogunjemilusi said though there was a gun scare due robbery from about 4 kilometres to Akpabio’s residence at Ukana Ikot Ntuen, his home town in the Essien Udim Local Government Area which had no bearing to the meeting. He had wondered why such could be linked to Akpabio claim of assassination attempt.

Some Residents around Akpabio's house in Ukana when contacted said they never heard or seen any move of such or anything relative to an attack.

In fact, one of the residents, Nse Udofia said Akpabio normally comes home with not less than five trucks loaded with mobile policemen and soldiers in addition to the permanently stationed armed policemen, numbering more than a dozen in his house.

Anyone who is familiar with Akpabio style of politics will agree that he is a master of subterfuge, a con-artist versed with diversionary tactics.

About two years ago when the Economic and Financial Crime Commission (EFCC) beamed its investigation searchlight on the looting of Akwa Ibom State treasury by Akpabio for the eighth years of his administration as a governor, he faked an accident that never occurred to buy time that would enable him and his orbit to come out with a master plan to ward off the EFCC and to give the media something else to peddle instead running different mega headlines of his graft investigation. And that paid off.

Today, President Muhammadu Buhari who rode on the coattail of fighting corruption is now shielding Akpobio from facing corruption charges; the man who received about three trillion Naira with nothing tangible to show of, except white elephant projects doting across the state mostly his constituency which are now abandoned. Akpabio even left the Akwa Ibom State with a debt profile of a staggering N500B. Why should President Buhari even prosecute Akpabio? After all, Akpobio will now shore up the fast dwindling support base of Buhari and APC which recently suffered a tsunami defection.

The false alarm by Akpobio is another subterfuge to portray the most serene and peaceful state since the emergence of Mr. Udom Emmanuel, a man whose administration is emblematic of unity and peace, as a war-combatant state in order to attract sympathy from the federal level to inundate Akwa Ibom with cult boys, anti-riot police, soldiers and militarize it for election rigging that will favor Akpabio and his new found love - APC.

For a man whose eight years administration was gripped by fear and intimidation - a culmination of political kidnappings, assassinations and disappearance of prominent sons and daughters of Akwa Ibom origins, as well as the invasion and destruction of individual and private businesses to now raise an alarm over a very flimsy threat to his life smacks of a man who is a serial and congenital liar. As an American saying goes, "You scratch a lie, you find a crook, you scratch a lie, you find a thief."