US envoy: Disregard for rule of law Is worst Than corruption and stealing of public funds 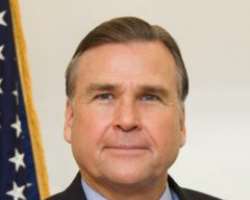 The United States Ambassador to Nigeria, William Stuart Symington, has described disregard for justice and rule of law as 'more damning a corruption than stealing of public funds'.

The US envoy stated this when he responded to a question from the members of the audience after he delivered the convocation Lecture of the University of Ilorin, on Monday.

He had delivered a lecture entitled “Citizen Leadership and the Link between Economic Diversity and Democratic Good Governance” where he said the task of making Nigeria is that of both the government and the citizenry.

While responding to a question from a member of the audience on how the country could develop as the United States, Symington highlighted patriotism, selfless and transparent service, justice, and consistency in doing good as important factors and suggested that disregard of justice and the rule of law should be seen as greater form of corruption than stealing of money.

Speaking on the lecture, the US envoy said the process of making Nigeria great requires a collective effort of all the stakeholders with the citizens working with the government instead of only relying on government for an improved fortune.

Amb. Symington who expressed believe in future greatness of Nigeria urged the citizens to always do at home as he said they do in abroad which, he explained, is giving priority to their Nigerian identity as against tribal or regional one.

He said that any young one who desires to contribute in future to transformation of the country to a better one should start the process now by endeavour to change life of his partner to a better where necessary.

The Ambassador said security and other challenges in the country would be surmounted when the citizens unite and work together.