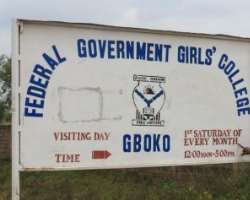 Old girls of the Federal Government Girls' College Gboko, Benue State, have petitioned President Muhammadu Buhari over the death 13-year Ochanya Ochiga, who allegedly died of complications from years of sexual abuse by her aunt's husband and his son.

The association in a statement on Monday in Abuja signed by Mrs. Tonia Edi-Lawani, national president, called on Buhari to ensure that the perpetrators; Mr. Andrew Ogbuja and Victor Ogbuja, face the full wrath of the law.

“As a body, we demand that the perpetrators, indeed murderers, be called to justice and severely punished. Messrs Andrew Ogbuja and Victor Inalegwu Ogbuja should be arrested for homicide and charged with first degree murder. They should be made to feel the full wrath of Lady Justice,” the association demanded.

The statement reads:
“We bring to your attention the incident of the death of 13-year old Ochanya Ochiga; a student of Federal Government Girls' College Gboko in Benue State. She died less than 48 hours ago, at Benue State University Teaching Hospital in Makurdi.

“The autopsy report revealed that the young lady died from severe health complications, including the dreaded Vesico Vaginal Fistula (VVF); which arose from a six-year series of vaginal and sodomic abuse from members of her extended family.

“In other words, from age 8 till her final collapse at age 13, Ochanya had been serially abused in both nether regions by her aunt's husband and son; namely Messrs Andrew Ogbuja and Victor Inalegwu Ogbuja, respectively.

“Mr. Andrew Ogbuja is a member of staff at Benue State Polytechnic Ugbokolo, whilst his son Victor Inalegwu Ogbuja is a final year student at the Federal University of Agriculture Makurdi.

“This is an outrage to FGGC Gboko, all female children, all women, Benue State, Nigeria and indeed the World. The advent of social media has brought to the fore the raging menace of child abuse and rape within our homes, communities, and nations. It is time that social media is also used to stop this menace.

“They should bear the brunt of the law in quantum measures. It was not enough for them to hurt young Ochanya from age 8; they had to repeat the barbaric sessions within a 6-year period. We can only describe such tendencies as animalistic, with special apologies to animals. As such, they deserve jungle justice. No mercy.