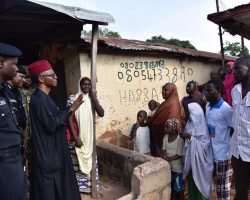 Journalists and civil servants, trapped by the imposition of an emergency 24-hour curfew by the Kaduna state government on Sunday, have recounted their ordeal.

Several of the journalists who were away from home when the curfew was declared Sunday afternoon, virtually putting the vibrant city in a lockdown, said they took refuge at the Secretariat of the Nigeria Union of Journalists (NUJ).

Mr John Fwah, Publisher of Newsontime, an online media platform, was among the journalists, who spent the night at the NUJ Secretariat. He said it was not an easy experience.

“There was no water, no food, we have to share two loaves of bread among the five of us stranded there, we took it with Lipton tea in the night and this morning before some soldiers on patrol took us home at about 11 am.

“I couldn't sleep until at about 5 am. Thank God we were able to communicate with our families to assure them that we were safe,'' Fwah said.

Fwah said he had just left the Polo Club, where a tournament was taking place, when he heard about the crisis in parts of the town and the declaration of a 24-hour curfew. He quickly sought refuge at the NUJ secretariat nearby.

On Monday, Fwah and his colleagues were taken to their various homes by security men.

“I have just left the` NUJ IDP camp', it was an uneasy experience. I now know what it means to live in an IDP camp”.

A senior reporter with Kaduna State Television, Mr Joseph Zango, said he had just closed from work at the station when the the 24-hour curfew was announced.

“Amidst the confusion it was difficult for me to get home, so I headed to the NUJ secretariat, where I met seven other journalists including two ladies who were later evacuated by a relative nearby, leaving five of us.

“We slept there until a team of soldiers evacuated us and took each of us home.''

Another reporter, Stella Kabruk, said she had to abandon the coverage of the Polo tournament and head for home when people began running helter-skelter.

“Unfortunately, when I inquired about the cause of the pandemonium I was told that there was crisis in Sabo area of the town and that is where I live.

“I had to drive home through safer routes, and along the way I saw some vehicles burning, and I later learnt that some innocent people lost their lives. ''

Mr Idris Abdulrahman, the editor-in-chief of the News Agency of Nigeria, in Abuja had visited his family in Kaduna. He said his plans were completely upset by the curfew drama.

“This has thrown me off balance because I planned to pass only one night in Kaduna but now I'm forced to seek alternative arrangements to keep my family safe.

“My visit was casual, to see my family after weeks of absence from them. This curfew has thrown up a big challenge to me and many others.

“It has disrupted my official engagements in Abuja and caused me some unexpected expenses at home.”

Abdulrahman said he attempted driving out of the town in the morning but was stopped by fierce-looking security men who would not listen to any explanation.

It was also a tale of woes for some Federal Government civil servants who planned to return to work in Abuja after the weekend. They found themselves stranded in Kaduna.

Mallam Abdullahi Mohammed, who works at the Federal Ministry of Agriculture Abuja, told NAN that he was forced to remain indoors in Kaduna since “police are patrolling our area”.

“This crisis and the attendant curfew have disrupted my plans. I wanted to get to Abuja by 9 a.m. but now I have to review my plans to accommodate buying enough foodstuffs for my family.”

Security agents have virtually taken over strategic areas of the highways and areas mostly hit by the crisis.

Malam Ado Abdulmalik, a politician heading to Abuja, narrated his experience, saying “those security men would not even listen if you have an emergency.

“I could not even go to railway station, few metres from my house, to board it to Abuja because police are patrolling everywhere.”

The curfew has crippled commercial and social activities, with hundreds of federal government workers, businessmen and women, politicians on transit to Abuja stranded due to the enforcement of the restriction on movement.

A cross section of residents who spoke with NAN expressed shock and frustration over the escalation of the crisis and sudden declaration of curfew.

Some of the residents who spoke in separate interviews with the NAN, lamented the shutdown of economic activities, adding that residents have inadequate food in their homes as they were not prepared for the curfew.

Martha Ayuba, a housewife said: “There are no business activities going on as they cannot buy food Ingredients.

“This is an unfortunate situation as preparation was not made for the curfew. I hope the curfew does not last for another 24 hours because all shops are closed and one cannot buy what he needs.

“We prayed for calm and peace to be restored in the state because in situations like this, people need each other and not violence.

Mrs Jummai Bako, a businesswoman said the curfew has affected her because she earns her daily bread selling foodstuffs.

“I can't go out to sell my foodstuffs in the shop because of the curfew.

“I have fresh tomatoes and pepper in the shop that if I don't sell them, I will lose.

Also some civil servants lamented the imposition of curfew adding that most workers were yet to receive their salaries, so they were unprepared and had not done their monthly stockpiling of food stuff.

NAN reports the usual Monday market where most residents converge to buy foodstuffs was deserted.

The residents demanded the arrest of those behind the attacks that claimed many lives in Karuwan Magani, describing the imposition of the curfew as an unpleasant situation.

“We will continue to plead with everyone especially our youths to conduct themselves within the provisions of the law, and to not to engage in acts that will disrupt the peace of the state,”

Meanwhile, uneasy calm is being observed in many parts of the town as areas such as Sabo, Barnawa, Narayi, Malali, Central market area and Unguwar Muazu look desolate.

The News Agency of Nigeria (NAN) reports that after the deadly fracas at Karuwan Magani, the spill-over crisis was ignited in Maraban Rido and Sabo, a densely populated area, prompting the imposition of the curfew by Gov. Nasir El-Rufai.

The Governor's Senior Special Assistant on Media and Publicity, Samuel Aruwan said the measure was to curb further breakdown of law and order. NAN