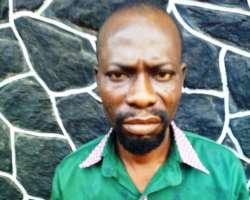 Another 38-year old-man, Abiodun Ojo has been arrested by men of Ogun State Police Command for defiling a 6-year- old old girl.

This happened few days after 35-year-old man, Ayegunle Adekunle was arrested in the same state for defiling a 3-year-old girl.

Ojo was arrested yesterday at Magbara Village via Idiroko where he lives in the same house with the parent of the girl.

The suspect was said to have lured the girl into a bush pretending that he wanted to send her on errand and thereby forcefully defiled the little girl.

The Nigerian Voice gathered that the shouting and cry of the girl attracted the attention of the local vigilante men in the area who rescued the girl.

The vigilante men informed the Police at Idiroko division and the Divisional Police Officer, Mr Aloko Amodu quickly led his policemen to the scene at Magbara Village and promptly arrested the suspect who has been severely beaten by angry mob.

The little girl was taken to hospital for treatment while the suspect is also receiving treatment because of the injury he suffered as a result of the beating by the mob.

The Police Public Relations Officer for Ogun State Police Command, Mr Abimbola Oyeyemi told The Nigerian Voice that the Commissioner of Police in the state, Mr Ahmed Iliyasu has ordered the immediate transfer of the case to Anti-human trafficking and child labour unit of the State Criminal Investigation and Intelligence Department.

The PPRO said the suspect would be prosecuted in court after the completion of necessary investigation.