Nigerian Elections; selling the girl to buy a lantern… 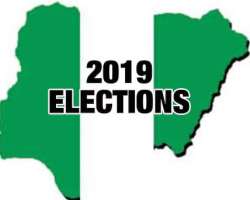 The person we were supposed to sell and buy a lantern, asked, "if you sell me to buy the lantern, of what use, when you have disposed the beauty for which the lantern was meant to help you see".

So the list of candidates from the over 90 political parties or gatherings will be submitted to the election regulatory body INEC preparatory to the 2019 General Elections.

But truthfully, will the recent proliferation of political parties in the name of fighting to restore democracy, abolish democratic dictatorship and fight the suddenly BAD change syndrome that is fast moving at a speed likened to the AIDS epidemic be the answer?

All one really notices, again empirically is the absence of strong political participation owing to a lack of a sense of a nation’s commitment on the part of most Nigerian political actors because the best that has brought the current unions together is a collective grief of having been outsmarted in the power and looting equation.

Political parties in Nigeria have refused to provide any political ideology as a way of providing a foundation for the expression of nationalism, this has made it possible for us to consciously create any party in which ethnic cultures and foolishness has not taken precedence. The nation Nigerian has no insurgent creed, fashioned out with great care as a vehicle to propel groups, classes, ethnic groups and parties to political power that is why so much foolishness is in display.

When the going was good nobody spoke up, the conglomeration and the discombularation of APC and PDP was okay, anyway like the Igbos saying when a man wakes up is his morning, at least they have woken up- good morning big fools.

We are playing the Danfo Driver politics so it’s all about the driver of the cab whose vehicle or car is next on the line and the backstabbing of drivers against drivers in relation to the Police, union officials, spare part dealers and others. The selfishness has closed our eyes to the truth of the lack of legitimacy of policy makers, faulty constitutional arrangements, political equality and popular elections. The fact is that Nigeria is not united, she is not strong, neither is she self reliant, there are no opportunities any longer such that we no longer have just brain drain but pocket and mind drain, our politics as played by our leaders have made our society, one of a law for the rich another for the poor.

Ever been to a typical Motor Park in Lagos, the Bauchi Road Park in Jos, or the Kawo Park in Kaduna you will get the picture, the noise from conductors, the fight of touts ad miscreants. The ranting of union officials and tax collectors. The passengers are not left out in the melee of all movement without motion and from the park when the Danfo leaves it certainly would be overload, no spare types or spare tyres no jack and no fuel…Its at best an environment that exists based on chaos. This is Nigerian politics in its best...screaming headlines of a public official’s escapade on the pages of paper…one week “EFCC here I come” the next week… “They want to kill me”. We sure are idiots…the miracles of Jesus in Galilee were not like this haba!

Nigeria is yet to attain a minimum consensus, an idea of one nationality, implying the existence of a shared national identity is found only in its embryonic form, sectional loyalties being of primary importance among the nationality group and this is because our leaders have continually played their politricks that way to their benefit. There is only one Nigeria when looting of the national treasury is to occur, afterwards the Danfo Driver Politics makes sure that all the formidable fundamental liberties in the constitution are honourable more in breach than in observance of them. The muted 2007 dream whether real or imagined would not have been possible if the constitution was a document that danfo drivers (politicians) respect.

A look at the new ‘clubs’ in formation would certainly show an array of dysfunctional actors and this stems from many factors and one factor, that is the geographical entity known as Nigeria today can be said to be a monument to British venture in administrative experiment and till date these actors have continued to write scripts and interpret to suit the motor park which Nigeria has become! So a polity without a central value or culture consciously cultivated to override the primordial values and loyalties of the players. There can be no clear perimeter with which to gauge or even teleguide the activities of actors in the Nigeria political system. The only uniting goal-oriented credo is looting, money; power and greed, so it is not as much as exposing oneself to the caprice of ethnic conscious people but greed motivated persons and greed inspired goals.

Our political system needs to be one of several systems coherent by infusing a central value to them. This central value, i.e. shared orientations towards action, this would define the type of role relationships which can arise and allow the individual to develop stable expectations about the behaviour of others. A political ideology can only be woven if the current iya ala amala politics of bureau de change style is purged out with Andrews liver salt. Nigerians should revolt, which ever way we do it, the sitting of men (which reminds me these days we have no men, as men have suddenly taking to feeling more comfortable as women) will not do it…somebody should do something quickly.

When the old man without teeth, insists that strong beef is his favorite, he's passing a message, and it is only a matter of time, reality sets, the dawn is better imagined than experienced.

Despite all, I see, and know, walk past and work with people who love Nigeria, they are willing to die for Nigeria, but does Nigeria care, they go through hell with painful bus stops. There are Nigerians, but let's not forget that "if you sell me to buy the lantern, of what use, when you have disposed the beauty for which the lantern was meant to help you see". At this rate, we may be toying with a Nigeria without Nigerians—Only time will tell.