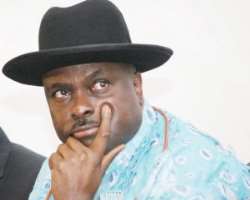 Former Governor of Delta State, Chief James Onanefe Ibori, has instructed his lawyers to drag the United Kingdom to the Court of Appeal at the European Court of Human Rights.

This is coming as the former governor yesterday lost an appeal against his conviction in London.

In a statement signed by his Media Assistant, Tony Eluemunor, Ibori said: “At 11: am today, judgment of the Court of Appeal, Criminal Division, was handed down. Once again the British Courts have unjustifiably denied me justice. The injustice contrived against me continued at the Court of Appeal. By this denial, I have been prevented from challenging my conviction even though the Crown Prosecution accepts the fact that there was a proven case of Police corruption.

“The Court of Appeal declined my application for leave to appeal my conviction based on Crown Prosecution (CPS) and Police disclosure failures compounded by police corruption unearthed way before I even arrived in the UK. The allegation of Police corruption, at least of Mr. John Macdonald, the Investigating Police Officer in my case, started on or about September 10, 2007, while I was still in Nigeria. This issue of police corruption was raised by a different agency of the UK government working on an entirely different case at the time

“This material fact should have been disclosed to my legal team on my arrival in the UK but it was not disclosed because the Crown Prosecution Service and the London Metropolitan Police knew the devastating and fatal impact that would have had on the case against me. The UK authorities chose deliberately to cover it up even though my legal team asked that all-important question in open court.

“This continued cover-up, which is inimical to justice delivery, has been displayed again today by the Court of Appeal when it denied me the opportunity to appeal my conviction at the Appeal Court and possibly the Supreme Court of England and Wales. This is international conspiracy carried too far to the detriment of the integrity of the British Judicial System. ”Numerous people have asked me to discontinue the appeal adding: 'But what do they care. It's a matter that has to do with a bunch of “corrupt” Nigerians. They can throw judicial decency to the dogs'.

“I say to the members of the public who have shown personal concern for my predicament that I will strive with every breath of energy in me to pursue the cause of justice not only for my sake but because it is the right thing to do to make the world a better place and to defend the rights of the down-trodden.

“So, I have put my legal team on notice to explore every legal avenue to expose this massive cover-up, including applying to the European Court of Human Rights to ensure that this assault on my fundamental rights does not stand.

“The Court of Appeal did not permit my legal team to even refer to this evidence let alone advance it as part of our case. Even now, I am not permitted to disclose the nature of this evidence for fear of committing an offence. In these circumstances, my legal team argued that there were only two options available. One; the prosecution should concede the appeal, or the Court should halt proceedings as an abuse of process because a fair hearing was no longer possible.

“Disappointingly, both the prosecution and the court took the view that saving face was more important than dispensing justice. Yet, I am fully resolved to challenge the ruling of the Court of Appeal at the European Court of Human Rights. Let the days be gone when British legal luminaries come to give seminars in Africa boasting about having the best legal system in the world.

“I thank my legal team for a great job. They have fought gallantly to save the British justice delivery from those undermining it. I have no doubt in my mind that justice will come my way eventually and no matter how long it takes”.

Meanwhile, Ibori has lost an appeal against his conviction in London.

Ibori was jailed in Britain for laundering tens of millions of dollars in stolen public funds through British banks and properties.

He was governor from 1999 to 2007.
He had pleaded guilty in a London court in 2012 to a 10-count charge of fraud and money-laundering, involving sums amounting to at least 50 million pounds ($66 million).

He received a 13-year jail sentence of which he served half, as is common in the British system.

Ibori, who is now back in Nigeria, appealed against his conviction, alleging misconduct by British Police and prosecutors, which he argued, tainted the judicial process.