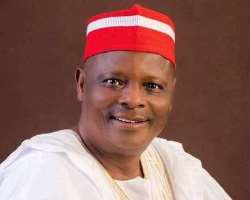 A Senator from Kano State, Rabiu Kwankwaso has distanced himself from the video indicating the State Governor, Abdullahi Ganduje of allegedly collecting 5million dollars as a bribe. Two separate videos had emerged online of the Governor allegedly collecting bribe from contractors in the state.

Following the emergence of the videos, the Commissioner for Information, Malam Muhammad Garba, had claimed that Jafar Jafar, Publisher of Daily Nigerian, was working with Kwankwanso.

However, Kwankwaso insisted that there was nothing between the publisher and him. Kwankwaso’s stance was contained in a statement by his spokesperson, Hajiya Binta Spikin.

The terse statement reads, “Everyone knows that Jafar Jafar is an independent journalist and his medium, Daily Nigerian, is also independent.

“There is no deal whatsoever between Jafar and Dr. Rabiu Kwankwaso. So if they are suspecting anything, it is left for them to prove it.”