Protection Of Civilians: Core Mandate Of The Army 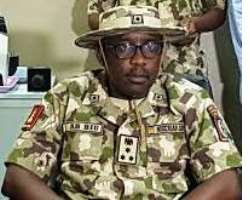 Protection of civilians in conflict has been described as one of the core mandate of he Nigerian Army. The Acting General Officer Commanding 7 Division Brigadier General Abdulmalik Bulama Biu, stated this on Monday, 15th October 2018 when the new Country Director of Centre for Civilians in Conflict, Mr Tunde Ojeo paid him a courtesy visit.

He thanked the Country's Director for the visit and solicited for synergy and collaboration among them towards combating the current contemporary security challenges confronting Nigeria.

The Acting GOC added that conflict was inherent in human existence and no individual, organisation or nation can tackle it alone, reiterating that the fight against insurgency was a non conventional war.

A statement issued Tuesday by Brigadier General Texas Chukwu, the Director, Army Public Relations said he further stated that the activities of the Boko Haram Terrorists is a total war against the Nigerian state, pointing out that their cardinal principles was to inject fears into people by attacking soft targets.

Earlier in his remark, the Country Director Mr Tunde Ojeo, thanked the Army for their support which enables the organization to carry out its activities in Borno State.

He stated that the purpose of the visit was to familiarise with the Division as well as strengthening the already existing cordial relationship between the Army and the organisation.

The Country Director added that its NGO has been working closely with the Nigerian Army especially in communities such as Bama, Dikwa and Damboa respectively. He craved for more interactions for the development of suitable strategies and approaches that would help in strengthening the protection of civilians in conflict.

He was accompanied on the visit by staff of the Ministry of Budget and Planning as well as personnel of Centre for Civilians in Conflict.