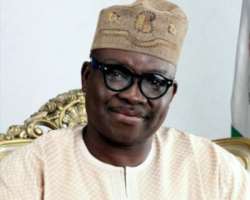 The immediate past Governor of Ekiti State, Ayodele Fayose, has arrived at the Abuja office of the Economic and Financial Crimes Commission, EFCC.

Fayose entered into the EFCC office in Wuse 2 in the company of Rivers State Governor, Nyesom Wike, and a former Minister of Aviation, Femi Fani-Kayode.

Fayose, who wore a customised T-shirt emblazoned with “EFCC I'm Here” over a pair of jeans and a face cap, went into the Commission with a bag pack.

Addressing journalists at the Commission, Fayose alleged that the EFCC deployed its men in his home, even when he had shown willingness to honour the Commission's invitation.

Fani-Kayode, who also spoke with EFCC detectives, joked that he was a regular customer of the Commission and asked them not to maltreat Fayose.