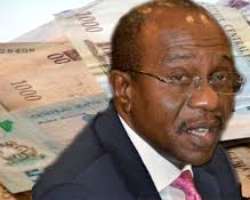 The Governor of Central Bank of Nigeria, Godwin Emefiele, has said that the present government has to save the local currency, the naira, instead of building reserves.

Emefiele, who made this known to journalists on Sunday in Bali, Indonesia, said it is difficult to talk about building reserves at the moment.

“We are going to need to build buffers but unfortunately I must say that we are in a period where it is difficult to talk about building reserves.

“You can only build reserve buffers if you want to hold on to the reserves while allowing your currency to go and wherever it goes is something else.

“It is a choice we have to make and at this time, the choice for Nigeria is to maintain a stable exchange rate so that businesses can plan and we don’t create problems in the banking system.

“Naturally, when this happens, it results in weakening of assets, rising non-performing loans and other wide implications. This is why we will maintain the posture we have and we believe that it is sustainable in the short run,” he said at a press conference to mark the end of 2018 annual meetings of the World Bank Group and International Monetary Fund.

Nigeria’s foreign reserves currently stand above $43.3 billion — one of the highest figures recorded since the 2014 oil price crash.