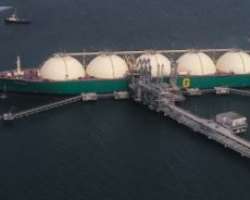 The announcement was made by the Chairman of the Advisory Board for the Science Prize and a science prize laureate, Prof.Akpoveta Susu, at a press conference in Lagos on Tuesday.

Reacting to the verdict, the Manager, Corporate Communications and Public Affairs Department at NLNG, Andy Odeh, said“With each passing year, our belief grows stronger that there is a place for The Nigeria Prize for Science in the quest to develop our country through science research and technology. “

“The current reality in today's energy worldis a trilemma. The world population is growing very fast that it is projected to increase by an extra 2 billion by 2050. It is like adding a new China and India to the world's population. On the back of this increase in population and improving fortune of people globally is a corresponding increase in energy demand. Where will this energy come from? Also on the back of allthese growth is the increasing clamour for clean energy as a result of climate change.

“Aside from gas being a significant player in the future's energy mix, renewable energy will take up a big part of the energy mix in the future. We are already seeing this in some European countries planning to eliminate carbon emissions.  Countries like the United Kingdom, Sweden and Norway and many other countries are making moves to significantly reduce their carbon footprints. Take for example India, which aims for 40% renewable energy by 2030. UK hasjoinedFrance to ban fossil-fuel cars by 2040. Norway aims for all new passenger cars and vans sold in 2025 to be zero-emission vehicles while Sweden has committed to 100% renewable energy by 2040.

“We can see the direction the world is moving. This work by Ngene can be one of the keys to the renewable energy jigsaw. Webelieve this is an opportunity to secure a niche market in Nigeria forenergy storage, riding on the back on this new type of batteries developed from the synthesis of nanostructured composite materials used as solidstateelectrolyte. The implications on solar and wind energy and onthe use in long driving range electric vehicles are evident. This awardshowshow NLNG is helping to build a better Nigeria,” Odeh added.

According to ProfessorSusu, “This winning work is evolutionary. Nigerians are beginning to see a clear link between their research works and problem solving, which was the ideabehind using science to manage our challenges. For instance, explosions in transformers are common experiences in the country. If we are serious, through this prize, this situation can be a thing of the past. I call on the private sector and the government to takeup thischallenge.”

He also announced “Climate change: Erosion, drought and desertification” as the themefor the 2019 prize.

According to the judges' report on the work  “Nanostructured metal hydrides for the storage of electric power from renewable energy sources and for explosion prevention in high voltage power transformers ,” “storage is a major challenge in conversion applications for intermittent energy sources as solar. Most current batteries have low storage capacity, are expensive and have safety issues due to occasional explosion caused by liquid electrolytes in these batteries. A major contribution of Dr. Ngene's work is the development of a technique for the synthesis of nanostructured composite materials used as solid state electrolyte in batteries. These materials have enabled the development of anew type of battery with potential to meet all requirements for storing electrical energy from solar panels and for use in long driving range electric vehicles. Also, solar and wind energy can be used through electrolysis of water to produce hydrogen for use in hydrogen fuel-cells.

The report stated further that: “Power transformers explosions due to degradation of insulators in the transformersare a major cause of power outages in Nigeria. These lead to the release of gasessuch as hydrogen and oxygen. Traditional sensors are not appropriate for sensingthese gases in transformer oils because they contain electrical components that canlead to explosions in the presence of hydrogen. Another major contribution of thewinning workis the development of a potent and inexpensive optical fibre remotehydrogen sensor that can precisely measure hydrogen concentration in transformeroils without the need of an electrical readout.”

The winner, Ngene, is an assistant professor in the Inorganic Chemistry and Catalysis group of the Debye Institute for Nanomaterials Science, Utrecht University in The Netherlands.He is the recipient of the prestigious KNCV (The Royal Dutch Chemical Association) Van Arkel best PhD thesis (2012/2013) award, and the chair of the 2013 Gordon Research Seminar (GRS) on Metal-Hydrogen system in Italy. He was also recently recognised asone of African leading young scientists by the award of the prestigious NEF (Next Einstein Forum) fellowship by the Chairman of the African Union (President PaulKagame).

The number of entries for the 2018 Nigeria Prize for Science broke entry records with total entry number of 84, exceeding the 2017 and 2016entry numbers of 27 and 15 respectively.

The decision on the winning entry of The Nigeria Prize for Science was reached by a panel of judges, led by Professor Francis Oluwole. Professor Oluwole is a professor of Physics who comes with a wealth of experience in atomic and nuclear energy.